Irony – How Safe is this Safety Vehicle? 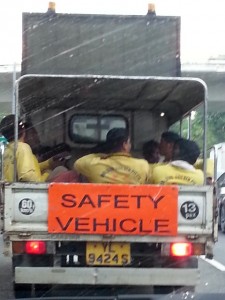 I shot this pic with my camera phone last Saturday afternoon.

Lorries should NOT be allowed to carry passengers.

I can never forget what I witnessed on June 22nd 2010. Two workers lying dead as a result of a traffic accident along the Pan-Island Expressway. (A third worker passed away later in hospital.) Six others were hospitalized. The lorry carried 17 people at the back when the accident happened.

I repeat: Lorries should NOT be allowed to carry passengers.

And that’s not the only accident involving lorries in recent times.

In March this year, more than 10 workers were flung off a lorry when it was involved in an accident along the Pan-Island Expressway in the Simei area. One died on the spot.

Construction worker, Rajesh Mahalingam, 29 was just two months away from starting a new life. He had plans to go home to India and get married and open a fish farm. His dreams ended that day on our Pan-Island Expressway

Today, Labor Day, let’s really get serious about the welfare and safety of our laborers, many of whom are from overseas, eking out a living here to support struggling families back home.