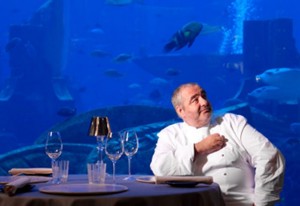 He's with the fishes now.

Daniel Boulard is here too. So is Joël Robuchon. So is Mario Batali (Osteria Mozza) and so was Santi Santamaria (who unfortunately died before opening night while introducing the media to his restaurant which was subsequently closed down by his daughter.)

And Wolfgang Puck has opened Cut. Luke Mangan has opened Salt, the Japs have brought Shinji here, opening not one but two branches, Hashida has also just landed on Orchard Road, Wooloomooloo and Dan Ryan’s – both from Hong Kong – are here as well and Singapore has so many Anandha Bhavans all claiming to be from India I doubt if any of them is the real McCoy. Anyway they are all here. Morton’s, Ruth’s Chris, Tim Ho Wan, Juchheim Baumkuchen, Paul, Mayson Kaiser, Ladurée, are some others off the tip of my jaded tongue. Even Hong Kong’s famous Mak’s noodles has a former chef dishing out the same wonton noodles at an eatery at Centrepoint. And you know what? Even barbers have gotten into the act: London’s Truefitt & Hill is here and will shave you for 88 bucks.

Well and good, but is it really?

One could argue that well-heeled Singaporeans no longer have to travel to far-flung places to eat at Michelin-starred restaurants, though many actually say the trips – budgeting and saving for them, the planning, the anticipation, the expectation – are part of the whole experience and that local versions of the originals can’t compare in terms of service or even the food. (The steaks at Ruth’s Chris, served here, certainly attest to that.) One could also argue that Singapore has “arrived” now that anyone here – including tourists –  could savor great-tasting local dishes and yet opt for finer dining too if we so wish.

I’m not too sure about all that, reasonable arguments as they may be.

I just wonder if we are losing something that speaks of the Singaporean essence – the Singaporeanness of things, if you will – if we are nothing more than just an “emporium” of sorts, a jumping off point, if you will, where everything is easily available and attainable. It reminds me of Australia – Australia has everything – cheese, caviar, wine, great steaks, even traditional barbers where you can get a wet shave with a straight razor. Indeed, you name it they have it but truth be told I would rather go to the south of France for my Roquefort, the Caspian sea for my Beluga, the Rhône wine region in southeastern France for my Châteauneuf-du-Pape and Peter Luger’s for some USDA Prime steaks and I’d rather plonk myself down in a barber chair at Taylor of Old Bond Street and enjoy an authentic London-style hot towel wet shave. You get what I mean?

So is all that foreign invasion a good thing?

But that doesn’t mean I won’t allow myself to be dragged to any of those chichi places.