On A Clear Day, You Can See Stupidity 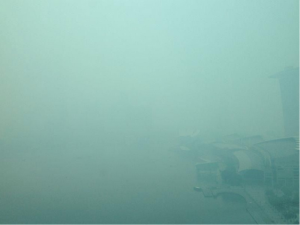 Year after year, the haze will shroud our island, reducing visibility, causing havoc to our breathing.

Citizens will make noise, the government will say they are working on it but the culprits don’t care a shit.

The same old story year in and year out.

The media shows us alarming high-levels of PSI readings and scream alarmist crap like “Haze in Singapore hits historical high, PSI at 321” as if they are delighted there’s something to report other than boring news about those losers with ugly dickfaces forcing even uglier sluts to suck their rotting dicks or schizo profs fucking even uglier shitfaces and getting free gifts, and tailored shirts – from CYC no less – as part of the package.

Now, listen up, don’t you clowns tell us how bad the haze is.

Everyone can shout and rant and kick up a bloody fuss. I myself am a master of that. I mean who can’t complain, damn it.

Show us some action. In other words, deliver some results.

This message goes out to those oh-so-brainy people being paid millions to shit all over us; for a change grow some balls to shit on our friendly Indonesian neighbors instead; tell them to do something about stopping the slashing and burning that’s killing all of us in the process.

If all you do is to preach “collaboration” and play abang-adek and smell the armpits of bumbling muttonheads like that oafish Yudhoyono and his ilk during photo ops, nothing’s gonna change. Reminds me of Johor – the way we carry the balls of the royal family assholes from across the causeway and allow them free rein here to behave like cowboys in our own country, we’re only losing our respect and kowtowing to bullies and peasants who shouldn’t have been allowed out of the jungles in the first place.

In an interview with BBC News yesterday morning, Dr Vivian Balakrishnan acknowledged that Singaporeans are “very frustrated, angry and distressed about the situation.” Yeah, tell me something I don’t know Mr Smarty Pants. This is not news, this is history. Don’t talk about history – show me an action plan of how you intend to lick this. Give me a positive – and smoke-free – scenario of the future.

Who the fuck don’t know we are frustrated, angry and distressed? You don’t have to be a doctor to tell anyone that.

And what’s the next thing the good doctor has done?

Typical of the PAP, he turned on fellow Singaporeans!

From The Straits Times: Dr Balakrishnan told BBC that Singapore companies in Indonesia would also be punished if they were found guilty. “I’ve spoken to my colleagues in Indonesia, and I told them if they have evidence to name the specific companies, I will take action against them,” he said.

Fantastic. What brains. I can’t wait to kiss the grounds you walk on, doctor. Oh how lucky we are to have you leading us as Environment Minister. How blessed we all are, we poor fools. How many Singapore companies are contributing to the haze, sure punish them all you want but are you missing something? What about those colossal palm oil plantations? Who owns them? Let’s go after the real culprits, all culprits. Turning on our own people only is like asking Mrs Lincoln, “Other than that (Lincoln’s assassination), how was the play?” (The 16th president of the US was watching a play with his wife when he was shot.)

The health of Singaporeans is being compromised.

I say let’s do this; this is the uneducated, uncouth Ah Beng approach:

Summon the Indonesia ambassador to the Istana and fuck him royally, until he shits bricks.

Then sack the retard, send him home. Give him 24 hours to leave the country. There’ll be no shortage of Singaporeans willing to help him pack or carry his luggage to the airport. I’ll be the first to volunteer.

Recall our own ambassador.

Expel all Indonesians working in Singapore. And I mean all. Each and everyone of them. Send them packing, like what Idi Amin did to the Indians in Uganda at one time.

Ban all Indonesians from coming to Singapore.

Stop Singaporeans from going to Indonesia and that includes Batam and Bintan.

Freeze all Singaporean investments in Indonesia.

Sever ties with Indonesia temporarily until PSI readings go back to normal for the next five years.

Sure Mount E will shut down; banks harboring the millions – some are probably ill-gotten gains – from Indon tycoons will suffer, and we will be considered bigtime bastards, but I guarantee you this will get results.

Sure every country is sovereign and we can’t intervene in the actions in other countries but here the Ah Beng approach is all about what we can do right here in our own country.

Sure I use expletives but I’m angry you see, I’m incensed. I’m fuming. Pardon the puns.

“Walk softly and carry a big stick, you shall go far.” – Teddy Roosevelt

But what do I know? I am no diplomat, I am not brainy, I don’t get paid millions to lead a nation of subservient, brainless people. If I can do the job of our ministers, I won’t be sitting on my big, fat, greasy ass blogging nonsense like this.

I guess I just have to suck it up!

Haze or no haze.

Enjoy your asthma and emphysema.

And hope this whole thing will blow over soon, pardon the pun.