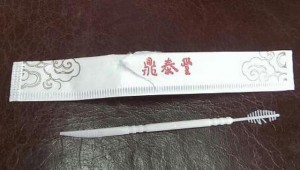 So Zoro helps himself to Ding Tai Fung’s toothpicks.

The eatery’s toothpicks are so good, he grabs half a box of them every time he visits.

Some were quick to call him a thief or pilferer.

I wouldn’t call it theft or pilferage but toothpicks I steal too.

Those righteous among you screaming “sin” “sin” go ahead and cast the first stone only if you have never pinched a pencil from a seminar, or a small plastic bottle of shampoo from a hotel room, or wiped your dick on your girlfriend’s bedsheets as you leave her house.

Truth be told, toothpicks seem like a hot favorite. I know a girl who would empty every toothpick holder she sees. Well, maybe she has lots of gaps in her teeth. For sure, some Chinese restaurants seem to try to beat toothpick stealers at their game – haven’t you noticed how nowadays most Chinese restaurants set aside with the cutlery, one, yes, just ONE toothpick per diner.

What I find truly amazing is the amount of chatter that toothpick story has generated.

Honestly I wouldn’t go so far as to call it theft, not even pilferage. I’ll write it off as a small cost of doing business.

And out of the brouhaha who has benefitted most?

Well of course the querulous get to hantam PAP yet one more time, but the one entity that benefits the most is Ding Tai Fung of course.

As for me, the reaffirmation that Zorro is only human is priceless.

In 2010, Lim showed up as Zorro in Singhealth’s Nurses’ Day celebrations at the Singapore General Hospital, hence his nickname. 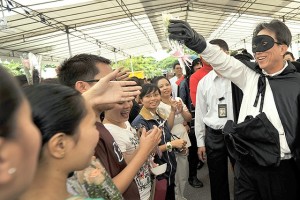