Blown Out of Proportion 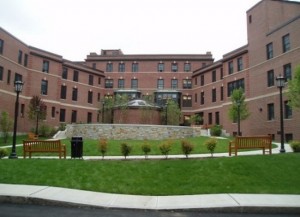 This Multi-Faith Center in Boston College is being used by Muslims, Buddhists and Christians alike.

He is a citizen of Singapore, a tiny country with an economy that has already overtaken the USA in gross domestic product per head two years ago. He owns a resort in a neighboring country where the Singapore dollar is two and a half times that of the local currency.

A group of resort guests requested for a place to meditate. Being in the hospitality industry and as part of customer service and good guest relations and in the spirit of tolerance, coexistence and acceptance and perhaps even thinking of how multi-faith halls are being widely used all over the world, the 45-year-old of a different faith from the guests opened the prayer room in his resort for their use.

Because of that, he got reamed and castigated big time. His permanent residency status was revoked. He was being charged for insulting the national religion and he may be jailed, or fined, or both. (He has been in remand since August 12th.)

They’re even considering demolishing the building because it has been defiled. (It was subsequently revealed that the religious authorities there have noted that the prayer room was not built according to correct specifications anyway.)

The group that requested for the room is also frigging idiotic, to be honest. They have forgotten that they were visitors in a country where nothing ever turned out right but it kept right on turning anyway. They should have acted in deference to the host country.

Its leaders should have been more sensitive. They should have known that using such a facility may trigger off a chain of rather disastrous events.

They should have demonstrated some circumspection and not exploited the poor fellow’s kindness, ignorance and naïveté. They should be disabused of the notion that people in that country will understand.

Two parties here: one, the resort owner – if only he had used his brains a bit more, and exercised caution. After all he was in a country where it’s easy to step on toes because some retards there think they have rather big feet although most wear shoes with Velcro straps because laces would be way too complicated for them, a country where if you step on toes, you’d better start shopping for pine boxes, even though his religion is the same as that of the state religion of the country in question. Two, the visitors who used the prayer room – if only the group’s leaders had used better judgment. Traveling in certain countries, one can’t be too careful, really. Indeed, if both parties had been a tad more thoughtful and considerate, peace and harmony would continue to reign.

This after all, is one of the tenets of all religions – to foster peace and harmony. A group of resort guests of a different faith asking for a room to meditate, do you turn them away? In the name of peace and harmony, you do your utmost to accommodate. In that man’s shoes, I would.

Only by remembering the fact that all religions preach about the fostering of peace and harmony would politicizing of such an incident by low-IQ and zero-EQ opportunists bares no teeth and bears no poisonous fruit.

One queston: when a person overlooks certain things or commits a mistake, aren’t all religions supposed to teach and practice forgiveness?