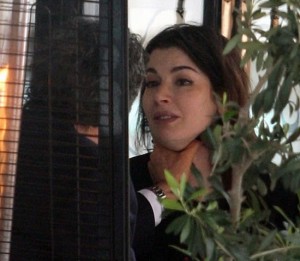 In June, British businessman and art collector, and overall scumbag Charles Saatchi and his wife, television chef Nigella Lawson, got into a tiff outside a London restaurant.

Uncomfortable photos appeared in the British tabloids initially and then circulated around the world of Saatchi apparently choking his wife. The photographer who took the shots claimed the incident lasted 27 minutes.

I can never understand how some retards can stand by and take pictures and even record the timing when they should have intervened to prevent disasters from happening but that’s another blog post for another day. I suppose some reporters would gladly kill their own mothers for a story.

Anyway a couple of weeks after the incident, Saatchi was reported to have said “Even domestic goddesses sometimes have a bit of snot in their nose. I was trying to fish it out.”

Sick, right? Slamming your spouse in full sight of the entire world, that’s really a class act, I must say.

Nigella has since moved out. Saatchi was given a “caution” for assault by law enforcement and later announced he is divorcing Lawson because she did not publicly defend his reputation. What the fuck?

Oh, last I heard that shitbag was threatening suicide.

He should have gone ahead and make the world a better place.

My heart goes out to Nigella. I feel her pain.

But having said all that, truth be told, there are indeed a few chefs I would love to throttle:

Gaetano Ascione– I’ve spent tens of thousands at his restaurant when he was working here but this name-dropping ingrate would always tell his staff to serve me the smallest portion of anything I’ve ordered. This douche bag’s ancestors could have well included a dung beetle or two, I’m sure.

The gold-draped retarded Superbiang with the shitty attitude frying char kway teow at that Pasir Panjang hawker center – I would love to strangle that bastard and his bitch of an assistant.

Gordon Ramsay – abusive, megalomaniacal media whore who barges into Chinese restaurants with a camera crew and berating Asians for eating their favorite food. Given the chance I’d go after that vainglorious buffoon with a cleaver. Comes from the same sewer as that other TV jerk, Simon Cowell.

Anthony Bourdain – another foul-mouthed guy who’s basically an ignoramus, although he did say that the best food in the world can be found in Singapore. (Probably says that of every country he goes to.) He’s never made it good as a chef to be honest. What is it about Bourdain’s stint as a chef that qualifies him to travel around the world and comment on people’s food?

Andrew Zimmern – a fat lump of lard who goes around the world calling the food consumed by other cultures “bizarre.” Let me tell you what’s bizarre – clowns like Andrew Zimmern stuffing their faces with the kind of crap he and his country men feed on, now that’s really bizarre. Zimmern was homeless for about a year because of drug and alcohol addiction and survived by stealing. He later became a cook in a restaurant in Minneapolis. Yup, you heard right. Minneapolis, hardly the culinary capital of the world.

The scary woman helping out at the Hokkien Mee stall at Bukit Batok – she’s not a cook or chef, just one of the wives of the guy doing the frying, but that cranky post-menopausal monster ought to be infibulated, then waterboarded.

The crabby crab guy in Geylang – garlic and monosodium glutamate, and Anthony Bourdain showing up made him an undeserved fortune and reputation which he reinforces by making customers wait, even when no other customers are in sight. Sick bastards like him should be taken out of the gene pool.

All other cooks, chefs, F&B assholes who don’t seem to realize that paying customers like me are the ones who put food on their own tables at home and finance their kids’ education and give them their Rolex kings and their Bengcedes Benz. They now probably want to outsource dishwashing too, according to media reports of August 5th. Imagine that: hawker licenses were originally issued to hardship cases but soon hawkers will arrive in their chauffeured-driven limousines; all ingredients cut and chopped, they just waddle up with their swollen scrotums and even more swollen heads and do the cooking. How perverted is this?

Hawkers, and Michelin-starred chefs for that matter, if you have an attitude, I simply won’t give you business. I don’t care if you are the best cook in the world.

Don’t play the diva game with me.

There are so many good places to eat and good cooks are a dime a dozen. Who needs chefs who are assholes and who think they are entitled to subjugate their customers?