Poor Fella Is Not Dead Yet Lah! 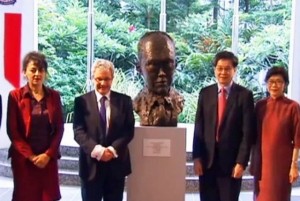 Alamak, why so sad?

The Lyon-Singapore Association and the Municipality of Lyon have unveiled a bronze bust of Lee Kuan Yew at the Singapore University of Technology and Design to recognize his outstanding accomplishments. The bust is intended to be an early birthday present for Lee Kuan Yew, whose 90th birthday falls on September 16th.

On September 6th the Chinese community threw a birthday bash to celebrate Lee Kuan Yew’s 90th birthday, paying tribute to his lifelong interest in developing the community, promoting bilingualism, and his pivotal role in building ties with China. The birthday boy was too ill to attend so son Hsien Yang showed up instead.

I have no doubt that Lee Kuan Yew is a great man. I am among those who believe that there can be no Singapore without Lee Kuan Yew but come on, let’s not behave as if he’s already dead! The man is still alive and kicking so let’s not start mourning him already!

Or more insidiously, is this a conspiracy at Lee Kuan Yew’s beatification?

In the meantime, Pope Francis has requested that a new statue of him that has been erected in the gardens of Buenos Aires cathedral be removed immediately.

The pontiff reportedly objected to the statue because he is “against the cult of personality.”