It’s Not Just the Boat that has Capsized 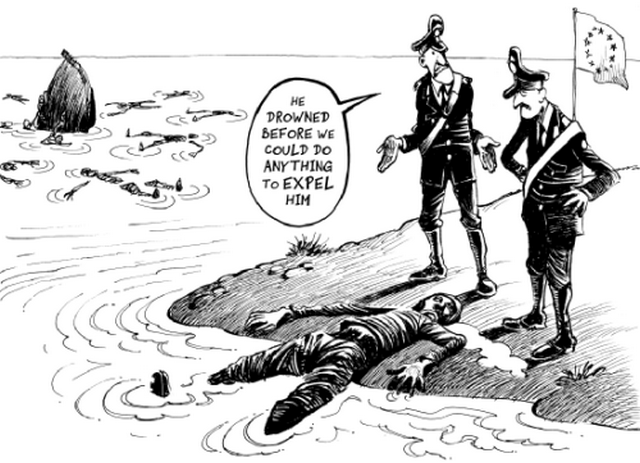 Earlier this month, more than 300 African refugees drowned when an overladen fishing boat capsized off the Italian island of Lampedusa.

The Italian government declared a day of mourning, granted honorary citizenship to those who died and promised a state funeral.

Wah, so good one ah?

Because at the same time prosecutors launched a criminal – yes, criminal – investigation against those who survived, under laws that would subject them to fines of 5,000 Euros per person.

This is the kind of shit that would make my grandfather shout “KAN NEE LAO BOO CHAO CHEE BYE!” out loud.

No wonder the thinnest book in the library is Italian War Heroes. Other than copying our noodles and calling it “pasta” and swaggering around like gangsters what do those oily fuckers know? Obviously these greasy, hairy, pickpockets and thieves haven’t met any member of the Chinese Triad yet.

Friedrich Nietzsche might have said that only idiots fail to contradict themselves three times a day but how can we trust someone when we know he talks out of both sides of his mouth?

Meanwhile, in this great country called “The United States of America”…

The Americans put a black man in the White House; oh how they loved that – to show the world that they are not racist, that if there’s any one country that would make history like this, it would be this great country called America.

Then they spend the rest of Obama’s terms condemning him and fighting him – just pick up any American newspapers – that is if you can still find one – and see what they say about their president.

Just recently, angered by the closure of national landmarks due to the partial government shutdown, a mentally-retarded, cum-gurgling, shit-eating moron named Larry Klayman of Freedom Watch, a political advocacy group, screamed in a public demonstration:

“I call upon all of you to wage a second American nonviolent revolution, to use civil disobedience, and to demand that this president leave town, to get up, to put the Koran down, to get up off his knees, and to figuratively come out with his hands up.”

White trash really buay kum guan that it’s not one of them sitting in the Oval Office, the way I look at it. But what do I know, I only have two PhDs.

Because of infectious, fetid, obnoxious parasites like Larry Klayman, America is in deep shit. The American boat has capsized long ago and together with it the entire country’s morality and sense of what is right and wrong. Their moral compass is corrupted.

“Hope you like the food here. It took me months of waiting to get a reservation here.” Response: “Food ok lah, food court also have what.”

“I’m having the runs since Thursday.” Response: “Let me tell you about MY bout with Montezuma’s Revenge.”

“Your renovation is causing a ruckus.” Response: “Our staff has to put up with this everyday too.”

“I have forgotten the 3-digit combination code on my luggage. How ah?” Response: “There are 999 numbers, start trying with 001 lah.”

“Oh thank you very much. You sure are a great help!” Response: “I guarantee you it’s quite fast – under one hour lah.”

“I’m not feeling well.” Response: “I just bought some jewelry.”

“The washing machine you sold me has gone fart.” Response: “I busy lah. Only free next month. Check internet how to fix.”