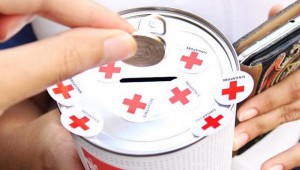 In a letter titled “Fund-raisers shooed away outside malls” published in yesterday’s Straits Times Online Forum, the writer, a Ronald Pereira who is a member of The Rotary Club lamented that on The Rotary Club Flag Day on October 19th flag sellers from the Interact Club (an organization established by the Rotarians for those between the ages 12-18) were turned away by security of Parkway Parade, Marine Parade and 112 Katong.

The understandably pissed-off Ronald Pereira wrote “I would like to know what message the management of these shopping centers is sending to these young volunteers.”

Well, to be fair, I have no idea how the Interactors went about selling flags but I have seen too many school kids – and often, even adults – selling flags by “ambushing” people at “strategic” locations like where commuters get on or off escalators near train stations and where shoppers get on or off escalators and elevators at malls. It embarrasses people who feel cornered to give and it has nothing to do with doing one’s bit for the underprivileged.

Flag Days should be banned, in my humble opinion.

For the uninitiated, a Flag Day here is a day when volunteers go around collecting donations – often given in the form of coins – which go into a tin (and often now even a plasticky kind of bag with a slit for money to go in) in exchange for a sticker. (In days gone by tiny square of papers were given with a pin.) The sticker (which you stick on your chest) serves to remind other volunteers that you have already donated and should be left alone. It also has the secondary purpose of allowing the donor to tell everyone that he or she is in solidarity, or identify with whatever cause he or she has just given to.

I am advocating that we ban Flag Days for three main reasons:

I don’t doubt that money collected this way can amount to a small bundle and that Flag Days can raise a bit of awareness – for example I’m not aware that there’s a Diabetic Society of Singapore until it has a Flag Day (see picture below) – but I honestly believe that we need to think of more sustainable fund-raising methods than Flag Days. 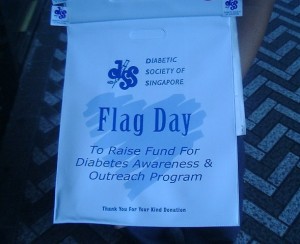 In this case, a plastic bag with a slit is used.