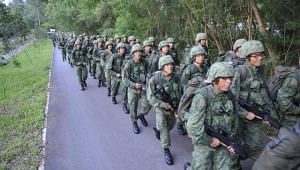 What else will they ban next?

CT owns an optical store and I’ve just visited him to purchase some sunglasses for Christmas gifts. We were on our way to lunch when we launched into an endless stream of Hokkien vulgarities and expletives while inside his car.

“Feels good cussing huh?” asked CT rhetorically while he let off another “chao chee bye” and “lan chiow” and I couldn’t agree more before joining in, adding to the cacophony.

CT and I met when we were in our late teens. We were both serving National Service in the army. Those were the days when recruits were literally tortured and abused with no way to seek recourse. In the army we were put through rigorous physical torture and even harsher, dehumanizing psychological and verbal abuse. It gotten so out of hand that after our batch, the government issued a booklet intended to identify what was legal and what was not. If you were told to do star-jumps, or do duck-walks, you could legally decline. That’s the theory. Thinking back, those Ministry of Defence guys were really naïve to think that recruits could do that. Imagine some officer from hell demanding that you do star-jumps and you push back or decline and throw the book at him. Sure, sure.

But the very vulgar and obscene songs, (many of them in the Hokkien dialect), though crude and uncouth as they were (“I rubbed your sister’s cunt until wet wet” or “I fuck your mother’s smelly pussy”) got us young men through some of the most physical demanding and mentally tormenting moments in our national service days. We sang during road marches, drenched with sweat, we sang during three-mile runs, wet from the heavy monsoon rain downpour, we sang while polishing our boots by candlelight (already lights out but as always we still had tons of chores to do) and we sang, sobbing, and with tears flowing down our cheeks, when we received news that while serving the nation, our girlfriends had dumped us.

Even today, my friend CT and I, plus many other friends, acquaintances and colleagues, even the women among us, prim and proper in our daily professional lives, would find it very cathartic to let out a vulgarity or two when we are together, letting our hair down, hanging lose, trying to chill out and relax from idiotic bosses or moronic clients. Like CT said it “feels good cussing.” Often there is also simply no substitute for some expletives that are perfect for describing what words cannot describe. And some of the people among our friends are professors of English Language at UK universities and they curse like sailors too! We have a forensic pathologist and a world-renown orthopedic surgeon among us as well and they curse like hell too! When they let their hair down among friends, they punctuate their sentences with “lan twee”s and “lan chiow”s.

The Association of Women for Action (AWARE) recently objected to the lyrics in a verse of a song sung by army boys in Singapore and the ball-less Ministry of Defence, completely missing the point, was pussy-whipped into actually going ahead to ban those lyrics!

The original verse of the ditty went like this:

MINDEF wants everyone to sing the “correct” version which is:

Booking out, saw my girlfriend/Saw her with another man/Broken heart, back to Army/With my rifle and my buddy and me.

I’m afraid very soon, they will even regulate how conversations are being conducted in the camps and in locker rooms.

Here are some examples of how modifications could take effect:

“Good morning, soldier-in-the-making, may I humbly implore you to engage in copulation with your maternal parent’s malodorous reproductive organs leading to the birth canal while you awake from your slumber and become cognizant of realities. Would be that acceptable to your good self?”

“Oh hello, you-who-are-intellectually-challenged, if your desire and aspiration run contrary to mine, on my derriere you may plant in a juxtaposition two orbicularis oris muscles in a state of contraction.”

“Hey, you bastard, come talk to me after this!”

“Hi, you-who-were-born-before-your-parents-were-married, come parlay with yours truly when the present moment has passed into oblivion!”

“Hey, mother-fucker, call a spade a spade will you? This is training, not torture!”

“Greetings, you-who-engage-in-sexual-intercourse-with-that-parent-of-yours-who-gave-birth-to-you, would you be so kind as to not call a spade anything else but a horticultural implement for removing unwanted botanical specimens? This is human resource development, not the infliction of torment designed to perpetrate pain and to solicit compliance.”

To me, MINDEF is simply still as clueless as ever, and I’m once again made aware that AWARE is far from being aware of anything worth being aware of.