The Tilapia – Not a Fishy Tale 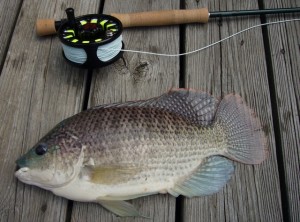 When I visited Israel I ate St Peter’s fish.

Back in Singapore, an acquaintance scoffed at it and howled with laughter as he recalled how he realized that St Peter’s fish is nothing more than the Tilapia fish. He dismissed it as “long kau” fish – a derogatory term meaning wild fish commonly found in our monsoon drains.

Actually the only thing worth laughing about is his foolishness.

Tilapia is the common name for nearly a hundred species of cichlid fish from the tilapiine cichlid tribe. Though they can thrive in seawater, Tilapia are mainly freshwater fish, inhabiting shallow streams, ponds, rivers and lakes and man has been consuming this beefy fish, also referred to as “aquatic chicken” since the time of Moses.

In fact, Tilapia were one of the three main types of fish caught in Biblical times from the Sea of Galilee. The name “St Peter’s fish” comes from the story in the Gospel of Matthew about the apostle Peter catching a fish that carried a coin in its mouth, though the passage does not name the fish.

The ignoramus who derided pilgrims to Israel feasting on Tilapia is sorely lacking in Bible knowledge and misses the point totally. The point is that from five fish and two loaves of bread, 5,000 were fed. It was a miracle. Considering that a half-pound Tilapia could actually feed two, I suspect more than 5,000 were actually sated.

Last month, the International Symposium on Tilapia in Aquaculture was held in Jerusalem. It was the 10th of the highly successful series of symposia that have brought together Tilapia biologists who review the latest discoveries in Tilapia nutrition, physiology, reproductive biology, genetics, ecology, improvements in production systems, and other fields related to Tilapia and their use in aquaculture. Now laugh at that!

Today, Americans eat at least 500 million pounds of Tilapia a year. Try pooh-poohing that! As a matter of fact, Tilapia is now the fifth most popular seafood consumed in the United States.

Most Tilapia consumed today are farmed bred. (The aquaculture of Tilapia goes back to ancient Egypt.) In fact, today, world farmed fish production has topped beef production. Some argue that farmed fish are inferior. Farmed fish aren’t necessarily inferior to their wild-caught brethren, any more than farmed beef or grain is inferior to wild varieties of those food. And there’s no guarantee that wild-caught fish are a safer food source than farmed fish, as the former often ingest a variety of toxins and other pollutants that flow into the world’s waterways. Of course, farmed Tilapia can vary considerably in quality based on where they are produced.

Here’s my Tilapia ala Thai style recipe: Sizzle Tilapia fillets (previously lightly coated with corn flour) for two or three minutes on each side until crisp, then remove and keep warm. In the same pan, briefly fry spring onion, garlic and ginger, then add soy sauce, brown sugar and lime juice and simmer until slightly syrupy. Slather the sauce over the fish, scatter with chilli, Thai basil or coriander, then serve with lime wedges.

Note that the older generation often refers to the Tilapia as “Japanese fish” because during the Japanese occupation, lots of Tilapia were brought over from Java as a sustainable food source to feed the masses. Note also that one other fish, the John Dory is sometimes known as Peter fish or St Peter’s Fish due to the myth that the distinctive dark spot on either side of its body is from the thumb print of St Peter, a fisherman.