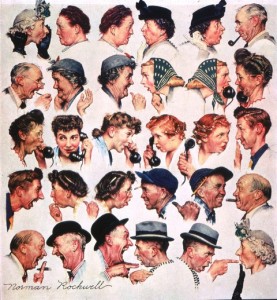 Yes, I am divorced.

No, no, my wife hasn’t kicked me out of the house yet.

It’s just that I’ve made it a point to divorce myself from unpolished, uncivilized, boorish Singaporeans.

Landing at Shenzhen airport earlier this month, I was confronted by a nervous, weaselly-looking fellow who scurried towards me like a rat and confronted me with a paparazzi-like question: “Are you so-and-so?” Turned out that he was an ex-Jaycee whom I first got to know nearly 30 years ago. The second question he ambushed me with was “I heard you are divorced, is that true?” I reminded him that about 15 years ago, we bumped into each other in someone’s office and he had grilled me with the same question. My answer to his question then and now is “No.” I assured this retard that Yin and I are happily married with three children and two grand children and this is our 29th year of marital bliss. However, I was miffed that some people whom I hardly know have the gall to go around asking others such in-your-face questions!

Out of the blue, a long lost acquaintance phoned to invite me for lunch. However he gave a date that could not be moved. I explained that the date he proposed was not ok for me and his response was that that’s the last day he could use his free voucher!

Not long ago I was summoned by my father to be interrogated by him. A member of our extended family had seen me with a woman along Orchard Road and had brought it to my father’s attention. The implication was that whatever woman I was with must be one I was fucking, therefore I was being unfaithful to my wife, and bringing great dishonor to the family. I reminded my father that most of my friends are women, that I had women bosses all my life: SS, JA, TL, LCL , AO and TLC, and I have many clients and colleagues who are women so what’s the big deal being seen with a woman?! For sure I wouldn’t want to have sex with any of my female bosses even if all the other women in the world have died. Truth be told, I’d rather indulge in onanism if I’m really desperate! Anyway, when is it anybody’s business who I have sex with?

At the buffet lunch at Shangri-La Singapore on November 12th an obviously brain-damaged Singaporean emptied the entire serving of crab claws leaving those behind shaking their heads at how inconsiderate some Singaporeans can be! Next to him, a woman took ALL the oysters and put them into her own plate, leaving those behind her with nothing.

Yes, Singaporeans! The buffoons in our midst. (With apologies to Michael Apted who made Gorillas in the Mist.)

Let’s show the rest of the world that we Singaporeans who claim to live in a first-world country have enough sense in our heads to be able to interact internationally as sensitive, worldly-wise adults, with decency and respect for individuals. Let’s not function on empty up there where our brains should be. This applies to both men and women – indeed some of the worst gossipers I know are men, and some of the worst agents provocateurs or shit-stirrers I know are men too, Singapore men.

Is there a need for us to scrutinize other people’s physical appearance and then ask rude “in-your-face questions” just to satisfy our own curiosity? Is there a need for us to “confirm” pieces of juicy gossip and rumors we’ve heard? To me, that’s being very very rude and uncouth. No matter how curious you are, you shut the fuck up and restrain yourself from asking those questions in your mind.

So guys, let’s watch what we say. I am saddened that I have to remind some of you but please, let’s behave like grown-ups. Let’s not be known as people lacking in even the most basic concepts of what’s acceptable or unacceptable as conversational topics.

End of my harangue.

Yes, I am divorced indeed.

I’ve made it a point to divorce myself from unpolished, uncivilized, boorish Singaporeans.

So please don’t approach me and ask me shitty questions like “Why do you eat so little for someone so big?” or “Why aren’t there hairs on your legs?” or “What position you like during sex?” or “Are you a breast man or a leg man?” or “Are you fucking that woman?” because I’m likely to retort by asking you a question myself, and the question is likely to be “Oh you must be a Singaporean, aren’t you?”