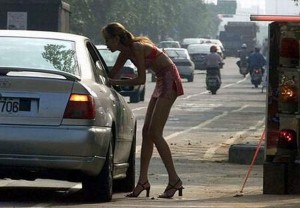 She knows how to get your ratings up.

When you turn to Channel NewsAsia you’ll see those irritating trailers that keep on appearing – so-called “news clips” boasting about yet another Channel NewsAsia’s glamour event where guests were invited to quaff champagne and gawk at jewelry or in the latest case, Rolls-Royces. Sometimes the channel flaunts the success of some so-called medical “seminars” (held supposedly for public education) by interviewing participants who can hardly put their thoughts together, let alone speak. Gosh, why are those morons on TV so incoherent, and why do those retards on TV speak such horrible English?  It is common that at such events, senior management of Channel NewsAsia stands up to make some self-congratulatory-type speeches lauding their organization’s greatness and what have you. In print media, these would not be classified as news, they would be called advertorials. I call it the media prostituting itself shamelessly. It’s vomit-inducing, as far as I am concerned.

The New York Times’ stated goal is “to give the news impartially, without fear or favor, regardless of party, sect, or interests involved” and The Financial Times’ motto is “Without fear and without favor” and Channel NewsAsia’s tagline is “Understand Asia.”

Huh? Asia and it’s never-ending ineptness (think Philippines), Asia and it’s corruption (think Philippines, Indonesia, Malaysia, Thailand, India, Pakistan, China) or Asia and its subservient lackeys and their willingness to kiss the asses of whoever’s in power or Asia with its extractive regimes and kleptocracies that rule in the interest of an elite that controls economic resources and has scant interest in sharing wealth or promoting progress?

When the media prostitutes itself and sleeps with the enemy one can forget about impartiality, objectivity and all those high ideals. Ever wonder why news about, say the quality of air, always appear on the same page, or near big ads selling air purifiers? Come on, let’s not be naïve.

There is no credibility left. Zilch.

That’s why I spend thousands annually subscribing to foreign newspapers and journals and periodicals; that’s why I watch the BBC and listen to BBC radio and to as little of our local crap as possible.

I reckon after 56 years of living on this wretched earth, I’ve dodged my fair share of projectile-vomiting.