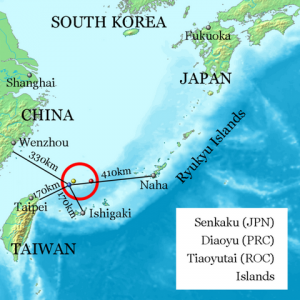 A huge swathe of mainly international airspace above the East China Sea was on November 23rd declared by China to be its Air Defense Identification Zone or ADIZ. All aircraft intending to fly through had to file flight plans with China, maintain radio contact and follow instructions of Chinese air traffic controllers or face “defensive emergency measures.”

Lots of countries establish zones in which they require aircraft to identify themselves, but they tend not to be over other countries’ territory. China’s ADIZ overlaps with Japan’s own air-defense zone, which includes some specks of rock that Japan administers and calls the Senkaku islands and which China claims and calls the Diaoyutai islands. Taiwan lays claims to these islands too, referring to them as Tiaoyu islands.

Thumbing his nose at China, Barack Obama on November 26th sent two B-52 bombers to fly through the new zone without notifying China. On November 28th Japan and South Korea sent aircraft into the zone.

Some believe that China had wanted that to happen so that it can claim “inevitability” when its own aircraft fly through other countries’ airspace as it intends to in the not-too-distant future, as part of its own hidden, sinister agenda to set up a casus belli with its neighbors and the US.

Some says that in the wake of the global financial crisis, China is behaving this way perhaps it believes its own narrative of Chinese rise and American decline. In other words, it has started to believe in its own bullshit.

China reminds me of an obstinate teenager who thinks that his hormonal-driven growth spurts enables him to bully when he actually has very little to work with up there. Or an old man who thinks he can do no wrong simply because he has lived a long life.

China’s latest move is a miscalculation that will incur the wrath of nations and cause disappointment domestically. So far the big bully is still looking for a face-saving response after the defiant intrusions by the US, Japan and Korea.