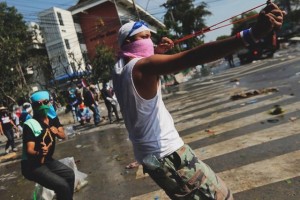 A very civilized Thai behavior in the land of smiles.

King-makers in Bangkok were resentful that people actually win elections.

They were disappointed and shocked that elections have resulted in someone whom they intensely disliked garnering enough votes to win. Later, they almost had a fit when this same person, whom they hated so much actually won re-elections! They were like “Shit that bastard got re-elected!”

Thwarted, they took to the streets.

Contrary to its image-building bullshit about being a constitutional monarchy and above petty politics, the palace has been embroiled in behind-the-scene politicking since day one.

And just talking about the palace can get one jailed. This post could get me jailed. A kangaroo court would try me and I would be polishing the bars. Thank God I’m NOT in Thailand.

Now they take to the streets again.

What is it that is in the brains of some of these hooligans – is it feces? – that makes them think that in this day and age, the way to bring about regime change is through violence?

If I were God, I would teach them all a hard lesson or two.

Yes, they all deserve a collective slap from the Almighty.