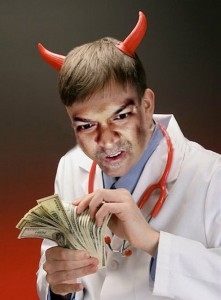 Screw the The Hippocratic Oath!

I know of an orthopedic surgeon who gets rewarded with a free trip each time he uses a particular implant. I know doctors who get paid for speaking at public forums sponsored by drug companies. I know the local dental association endorses a particular brand of toothpaste. I also know that doctors and dentists make money from prescribing and selling certain medication.

British drug maker GlaxoSmithKline recently announced that it will no longer pay doctors to promote its products and will stop tying compensation of sales representatives to the number of prescriptions doctors write.

This is a welcome move and effectively ends two common industry practices that critics have long assailed as troublesome conflicts of interest.

The move comes at a particularly sensitive time for Glaxo. The company is the subject of a bribery investigation in China, where authorities contend the company funneled illegal payments to doctors and government officials in an effort to lift drug sales.

But it is a good move anyway, being brand-agnostic means patients get the best recommendation, and are not prescribed drugs based on how the doctors are being incentized.