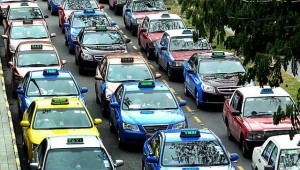 All waiting for extra bucks?

In two recent instances, authorities have shown that they have no balls!

People in charge must lead, follow, or just get out of the way!

CASE ONE: One week before the launch of the national Do-Not-Call registry, the authorities backtracked and say they now allow businesses to continue to spam existing customers.

Consumers Association of Singapore executive director Seah Seng Choon took the words out of my mouth when he hit out at the concession. He said: “The exemption is completely unnecessary. It dilutes the original intention of the DNC Registry. It effectively gives businesses a second bite of the cherry as they can now e-mail and SMS consumers with marketing messages. We are disappointed that our concerns are ignored. Now consumers have to put up with the inconvenience of dealing with spam.”

Those of us who rely on taxis are an exasperated lot. Lines at taxi stands are very long, and using the phone to call for a cab is near impossible most days, especially during festive periods or during peak hours.

It there’s one negative about this otherwise great country, it is the appalling taxi situation we are confronted with. Other capitals of the world do not have such a problem. I’ve lived all over the world and in Hong Kong, Sydney, Tokyo, London and New York, cabs are easily available any time of the day or night.

One mobile app that was highlighted in the Straits Times, GrabTaxi, works on a reward-based system, allowing passengers to pay drivers an extra sum of money to entice the taxi driver to accept a booking.

The Land Transport Authority, however, clarified that it does not regulate third-party taxi apps, and reminded taxi drivers that “in using such apps, taxi drivers are not allowed to overcharge their passengers by collecting fares that are not set or exceed those set by their companies.”

Like that, so how? App developers are not regulated but taxi drivers are benefiting from the extra cash – The Straits Times quoted a taxi-driver who claimed he made a hundred bucks more in four days – while LTA is saying taxi drivers are not to collect fares that are not “allowed.” How is that possible when clearly a generous tip is beyond what is allowable fare?

LTA should fix the problem instead of issuing ambiguous statements to further confuse the public.

Taxi drivers in Singapore are a spoilt lot, with tons of incentives to compel them to stay on the roads and apps like the GrabTaxi app are not helping at all.

What’s worse: authorities with no balls to take a firm stand about issues that perplex Singaporeans! If you set up a Do-not-call registry, fucking enforce it! If taxi drivers are not allowed to charge extra, forbid them from responding to passengers willing to throw money at them through apps like GrabTaxi.

People entrusted to run organizations for the betterment of citizens cannot and should not suck the cocks of big business or sit on the fence and hum and haw. If Deng Xiaping was humming and hawing while scratching his scrotum when students took over Tiananmen Square in 1989, China would degenerate into utter and absolute chaos.

Deng sent the tanks in!

Deng should be sent to Thailand today, but I digress.

Yes, the Land of Smiles, where hooligans throw grenades at the police.