Jamie’s Not That Bad Lah 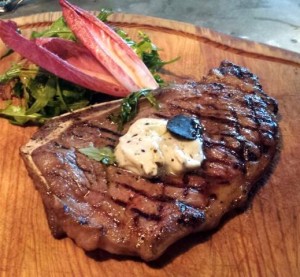 Most friends who’ve eaten at Jamie’s Italian at Vivo City were more disappointed with the “quality” of the wait staff than with the rather “ordinary” food.  Jamie Oliver is the victim of his own success. Many well-heeled locals have jaded palates from eating at award-winning restaurants all over the world plus the idolatry of Jamie Oliver causes expectations from diners that are unrealistic. I too consider myself a well-traveled gourmand (I wouldn’t be so pretentious as to consider myself a “gourmet”) and yes, the waiters and waitresses at Jamie’s in Singapore do look rather tired most times and it’s often hard to get their attention but despite the fact that I still think Morton’s the only place in Singapore to go to for real serious steaks, I do enjoy Jamie’s  30-day aged 350gm Angus breed bone-in strip loin served with wild mushrooms and peppery endives although the last three times I was there standards were clearing dropping. Yes, I’ve had that steak (listed in the menu as “30-DAY MATURED PRIME RIB”) at least five times and the last three times were sub-par. Did the restaurant changed suppliers?

The GRILLED PORK CHOP (“marinated and cooked under a brick with parsley bagna cauda, apples, kohlrabi, mint, lemon and crackling”) was a pretty good size piece of pork to sink one’s teeth into, but the CRAB SPAGHETTINI was a tad salty probably due to the anchovies and the WILD TRUFFLE RISOTTO, though I ordered the main course portion, still left me quite hungry! A friend ordered the PINK SNAPPER ACQUA PAZZA which though described as “pan fried” actually looked more like Chinese steamed fish. She didn’t complain because she was being a gracious guest but I guessed she did not enjoy it at all. However, for that price (32 bucks Singapore) you can’t get a decent steamed fish at a Chinese restaurant here, at least not a live one from the tank. For dessert I always have the CREAMY PANNA COTTA, described in the menu as “wobbly…served with a fruit compote”

For someone super critical, I am kinda surprised that I enjoy Jamie’s. Will I go back? Maybe not so soon, but for out-of-town guests who want to eat in a “brand-name” place, I think Jamie’s a reasonably good choice.

Singaporeans should just manage their expectations.

Jamie’s not that bad lah.