Killed for Taking Up Space 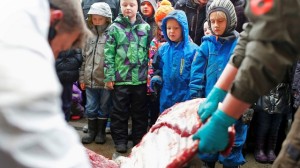 The reasons cited were lack of space and the need to comply with European rules on in-breeding. The animal had to be put down to ensure a healthy giraffe population, the zoo stressed. The zoo also condemned critics for the “Disneyfication” of animals.

Other zoos had offered to give Marius a home, a private individual was willing to purchase the giraffe for a large sum of money and an online petition resulted in more than 25,000 signatures.

The zoo, which kills off 20 to 30 animals a year said all offers from other zoos had been considered, but that any available space should be given to a “genetically more important” giraffe.

So, poor Marius was shot in the head on February 9th.

After the shooting, there was a public carving of the carcass, while children watched. Yes, disgusting and horribly sickening as it may appear, zoo visitors were actually invited to watch while the baby giraffe was skinned, dismembered, and fed to the lions.

“I’m actually proud because I think we have given children a huge understanding of the anatomy of a giraffe that they wouldn’t have had from watching a giraffe in a photo,” Zoo spokesman Tobias Stenbaek Bro said in a telephone interview with The Associated Press.

He said the zoo, which now has seven giraffes left, followed the recommendation of the European Association of Zoos and Aquaria to put down Marius by because there already were a lot of giraffes with similar genes in the organization’s breeding program.

Thank God I am not Danish and none of my children work for the Copenhagen Zoo. Otherwise I might be culled if space at home becomes scarce.

But seriously, I’ve just learned that although zoo officials may not publicize the fact, culling is often a normal part of a zoo’s breeding program and conservation efforts.

I certainly hope that’s not the case here in Singapore.