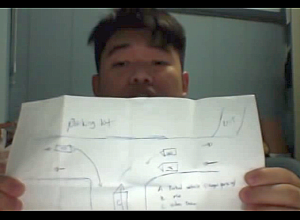 I’m so not fucking sorry!

He tailgated, overtook and braked dangerously in front of two cars. He also got out of his car to rebuke one of the drivers. His idiotic acts were captured on two videos and uploaded for the world to see. Then he put himself on yet another video offering a half-ass “apology” and trying to play victim. Netizens “terrorized” him and threatened his girlfriend, he claimed.

“I want Singaporeans to stop taking aim at my family and my girlfriend,” the moron whinged.

Yeah like it was ok to harass other drivers on the road and threatening to harm them with dangerous driving that could kill.

Typically big bully behavior. Acts like a retard, and when given a taste of his own medicine, he runs to mummy.

Well, serves him right, I say.

I’ve seen with my own eyes how driving brings out the worst in people.

We feel invincible in our super expensive driving machines yet we are rendered utterly powerless and impotent by crowed roads and slow traffic – a lethal combination.

So we fret, we swear, we blast the horn at anyone and everyone, and we drive erratically.

I often wonder if people are like that the moment they get behind the wheel, what is their real nature?

Such drivers should exercise impulse control and practice anger management – if not for their own good, then, for the mental – and physical – health of those around them.