Had a three-day gig in Melaka last week but client didn’t want to brave the heat so we ate hotel food and at Nando’s and Secret Recipe. Not a chance to sample any of Melaka’s outstanding culinary offerings. So when my job was done I hightailed to Kuala Lumpur in search of some good Malaysian cuisine. Hatten Hotel in Melaka where I stayed arranged for a cab which turned out to be a hot tin can of an oven on wheels because its air-conditioning wasn’t working. Plus, the Melaka-based driver didn’t know his way around Kuala Lumpur and it took forever for him to finally locate Majestic Hotel, which is a KL landmark any idiot should know.

That night we had steaks at Las Vacas at Mont Kiera and later adjourned to Escobar for drinks and cigars.

First stop was Restoran Hakka for its famous noodle, which we ate with a bowl of yongtaufoo-like offerings and a plate of the same morsels served fried. Those tasty dishes, accompanied by good old-fashioned local Malaysian coffee was the perfect way to start the day! 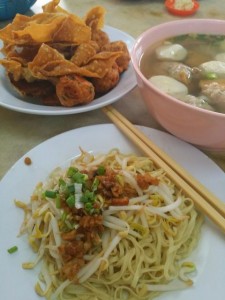 Our second breakfast was at Keng Nam kopi-tiam where we stuffed our faces with dry and soup versions of curry noodle plus – brace yourself for this – glutinous rice with a topping of kaya, yes, rich Hainanese-style egg jam! Definitely artery-clogging but judging from the number of apparently-healthy old people working at that coffee shop the delicious food they sell probably aren’t as unhealthy as they seemed. And they were all so mouth-watering.  That’s the main thing right? 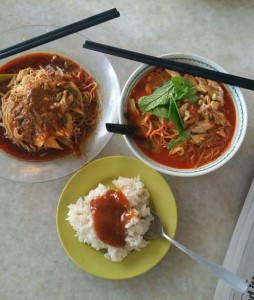 By then another couple from KL had arrived and they’ve headed to another kopi-tiam for horfun and pork satay. The satay stall was unusual in that it even served pork liver and intestine satay. 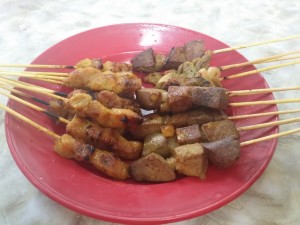 Afternoon was spent checking out some cafes housed in dilapidated, but cleaned-up buildings, apparently the rage with the youth and the yuppies of Ipoh these days. Some areas have been gentrified, and turned into hip places serving western food of dubious quality ala Singapore’s Tiong Bahru, which in my opinion is just dreadful. There are now some 30 such cafes and eateries all over Ipoh. Sad. I hope Ipoh doesn’t lose its heritage and become a big Bangsar.

We managed to squeeze in a relaxing massage before adjourning to yet another kopi-tiam – this one purported to be the original birthplace of Old Town Coffee.

My friends purchased pomelos (for which Ipoh is famous), salt-baked chicken and herbal duck before the drive back to KL.

The next morning I had a haircut and a shave at Truefitt and Hill, a Montecristo Edmundo and a Margarita at Majestic’s Smoke House and met my usual gang for high tea at the Majestic. For dinner we drove to the historical Sek Yuen for its legendary stuffed duck, and for supper it was KL Hokkien mee, no less.

It was a great trip, and a good break. But just before checking out, a business contact I had breakfast with told me that the Majestic is haunted and is “famous” – or “infamous”? – for being haunted. “Why did you choose to stay here?” he asked me, clearly puzzled and very perplexed. Well, thank God I didn’t see or sense anything during my stay. But I did notice that throughout my stay three rooms on my floor, 505, 509, 511 were left open all the time.

The Majestic wants to be known as a great hotel, but I rate it as a Raffles wannbe. The Smokehouse, for example is a poor, superficial attempt to emulate Raffles’ Bar & Billiard Room. Some minor touches were missing though. I wished they would deliver a daily paper to my suite – after all it was a suite and cost an arm and a leg. And I wished that, for the drive to the airport on Monday, they had not put me in that horrid mini-van driven by a driver with such bad body odor that I almost puked. Don’t hotels such as the Majestic have a fleet of limousines? (Plus the amount I paid surely entitled me to a limo?) And you know the drive to KLIA is a long drive indeed. Being olfactorically assaulted for an hour is sheer Guantanamo.

The journey back from KL was uneventful. KL immigration didn’t take any longer than normal though the country was abuzz with the sad news of MH370’s recent disappearance.

On MI339 back to Singapore, I was seated next to 2A, a seat occupied obviously by a retard born out of wedlock because only confirmed bastards would have manners such as those he exhibited.

Well, welcome to Singapore, I guess.

It was a rude reminder that I was home, after a week of mingling with warm, friendly, hospitable, caring and very well-mannered Malaysians.

The reminder continued yesterday evening at 6th Avenue when two cyclists swerved dangerously in front of the car I was in and rapped on the window on the driver’s side. They were apparently unhappy with the way the car was driven, for some reason.

If I meet those two hooligans again, I would slice off their heads. Yes, I would behead them.