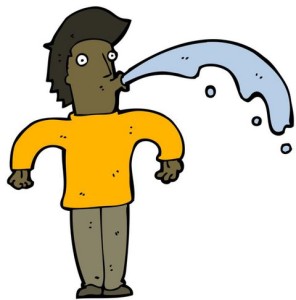 Last October 48-year-old cleaner Juraimi Kamaludin was standing in line to board a bus. He claimed he left the line for a drink but when he re-joined at the same spot he vacated, he was accused by a woman of cutting in.

So he spat at her and later forcefully pushed her out of the bus. Another woman who intervened was also spat at. In fact, Juraimi spat at this second woman six times within a space of 10 minutes.

“I can’t reach her. If I can reach her, I would have slapped her,” he told the judge at his trial.

“I’m not a bully,” he reminded the court.

See the video of the super prolific spitter here.

It’s indeed so easy to lose one’s cool and fly into a rage. These are difficult days indeed. Putin has just seized Crimea, a plane has just vanished into thin air, the beloved father of our great nation, the one and only Lee Kuan Yew, is not well, poor Yingluck torn the ligaments in her left ankle and is in a wheelchair, and IBM and HP are firing people and three domestic maids have just killed their employers. Plus the neighbors upstairs are again making helluva lot of noise in the middle of the night and some idiot I know continues to refer to his old woman of a wife as (puke-inducing) “girl” and another continues to call his wife “mummy” (irks me from here to eternity.)

One must resist the urge to “flip the table” and let one’s dark side rear its ugly head.

True, be assertive and all, but one doesn’t have to always win. If you have Gunnery Sergeant Hartman screaming into your ears, you would just have to grit your teeth and suck it up. Reacting differently would land you in hot soup. Sure, we’re indignant when we have been wronged, maligned and abused, but is retaliation the only response?

This little country is getting way too crowded and life in this pressure cooker is getting more and more stressful.

People are impatient, short-fused and easily riled up. A Briton just walloped a taxi driver over a 20-dollar fare dispute, an American was jailed for punching another cabby and just recently, Donnino Rossetti, the owner of an Italian restaurant was also jailed for hitting yet another cabby. Poor taxi drivers in Singapore seem to kerna a lot these days.

In this day and age, impulse control and anger management is critical. Learn to anticipate triggers and work around them. This is especially true for those who need to interact cross-culturally. Often the frustration of the other side seemingly not understanding us causes us to be really exasperated and annoyed. Our own inability to deal with our impatience and seething anger in a civilized manner translates into physical, often violent, action. Yes, before you know it, fist makes contact with flesh, and the rest is history. Faced with the inability to articulate or to reason, the inadequate resorts to brawn.

At the time of this writing, Juraimi Kamaludin has been found guilty and will be sentenced on Friday with a jail term and a fine. (He already has criminal records for mainly theft and drug-related offences.) He will no doubt pay for his toxic behavior in more ways than one.

Let’s hope fewer of us will meet a fate similar to his.

At the risk of sounding preachy, let me just say that I speak from personal experience. At 57, I am a lot mellower than before, yet I often have to fight the urge – even at my age – to give some morons a hard, deadly blow on their numb skulls or to just slice their heads off with a razor-sharp samurai sword. When I was much younger, I would just fly off the handle at the slightest provocation. I have fought with people before, and broken some bones. (Theirs, not mine.) I’ve smashed a TV set, hurled a durian at someone and once even threatened to throw one of my sons down 10 floors and till today I live to regret those acts of violence committed when I lost control in the heat of the moment, when I could not put my human nature down.

I cannot forgive myself for those acts; that heavy rock on my heart is punitive in and of itself, unfortunately, Juraimi Kamaludin’s punishment will be more than guilt in his heart or on his conscience, that is, if he has one.