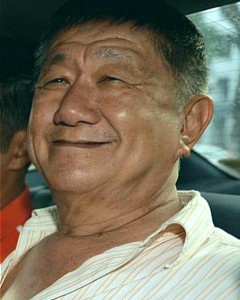 They couldn’t stop this 64-year-old joker from crashing through the immigration barrier and they want a thousand more of such policemen?

When Mrs XX passed away, some of us seriously thought of popping our vintage champagne to celebrate.

Yeah, it’s a cruel thing to say, but Mrs XX was a super obnoxious bitch and gave everyone a hard time with her high and mighty attitude, her self-righteousness, her sanctimonious smirk, her complete lack of interpersonal skills, her insufferable arrogance, her sense of entitlement and her belief that everyone else was stupid except her.

We thought that the worse of Mrs XX would die with her.

Her son who is rather high profile – being the head (at one time) of a particular government-backed campaign here in Singapore – is not much better.

This jerk is said to lack EQ. In fact, he’s known for that.

Imagine, having a reputation for not having EQ.

But I beg to differ.

Despite all that BS impression that Mrs XX was trying to project, the fact of the matter was that she didn’t bring her kids up well.

Well, you can tell by her son’s immaturity. Zero MQ.

And the difference between EQ and MQ?

The idiot throwing a tantrum because a restaurant has changed its menu lacks EQ. Another example of someone who lacks EQ is someone who uses what little intellect he has to judge and criticize others without realizing he is projecting a superior and judgmental attitude, and without awareness of how his actions impact others’ feelings. (Like Mrs XX above. She’s the one without EQ, not her son.)

On the other hand, two recent examples of people who lack MQ would be the person who ignores my existence and all my communications but who will not hesitate to reach out to me when I am needed; or the retard meeting me for the very first time yet would not bat an eyelid to tell me in my face that my solid gold Rolex is nothing but a mass-produced watch.

The difference is subtle. Bottom line: they are all douche bags.

Why do so many so-called “leaders” and those in senior positions exhibit such characteristics?

I know of another person who’s on this board and that board. Yet this prick doesn’t even know how to maintain eye contact when he’s having a conversation with you.

The recent BOI on the Little India riots, and the conduct of Malaysian Airlines’ officials at press conferences over the missing flight MH370 opened up and exposed the vulnerabilities of so-called “leaders” in our midst.

It has always been a tradition to pluck the brightest and smartest of the land and place them in key leadership positions. Even in ancient China, the ruling elite came from the scholar class. The warriors were regarded as “barbarians” – the brawn, versus the brain.

Singapore seemed determined to change that, however, by placing scholars into the armed forces and the police force, much to our dismay. Then these mollycoddled, fragile, precious, untested princelings are moved to run state-owned or government-linked enterprises. Just look at them! Just look at SMRT!

Singapore’s modus operandi almost guarantees that when men – and women – schooled in academic, textbookish theories are placed in decision-making situations, there is no guarantee they will be effective.

“Oh, let me check the operating manual first. There must be a chapter on this somewhere.” You can’t say that when a riot erupts or when people wait for four trains to come by and still can’t get onboard.

Look at those high-flying top officials at the BOI. Just listen to the asinine crap they uttered. Those sitting on that board weren’t too bright either. Gosh, was this the best our nation could come up with?

And last Friday, news reports said the police have arrested a man suspected of stealing two copies of newspapers from a shopping mall in Commonwealth Avenue West with the help of three members of the public on Friday.

Wow, instead of stopping the big crimes, these clowns are now chasing after old men stealing newspapers and even for such an idiotic act, they needed members of the public to help?! No wonder they need another thousand more of those Keystone Cops. If found guilty of theft in dwelling, the poor bastard faces up to seven years’ imprisonment and a fine, while crooks behind huge corporations who rob people blind are allowed to go free. Our casinos rake in US$6 billion in revenue yearly and those devils behind them are allowed to bask in their greed and luxuriate in their gains. What’s our leadership doing? “Something’s wrong,” as that other bumbling retard Dr Henry Lee (of the OJ Simpson trial) would have said. This little country of ours is now the second largest gambling hub in Asia. At what social costs? Are our scholar-rulers doing anything about it?

Look at the officials at MAS’ shambolic press conferences.  They have made a series of contradictory statements that added to the confusion of the moment, including conflicting information on the number and ethnicities of passengers who boarded the flight with stolen passports.

There have also been about-turns regarding the crucial sequence of events in the plane’s cockpit before it veered off course.

China has been rather unfair and unreasonable in their criticism of Malaysia but their anger is not completely unjustified.

Scholar-leaders may have attended some of the best schools in the world, but the old adage that you can take a boy out of the village but can’t take the village out of the boy holds true still. Yup, you can put lipstick on a pig and it’s still a pig.

Is there a solution?

Paper qualifications count for shit and are not worth the papers they are printed on if those who possess them lack maturity and the requisite experience from the school of hard knocks.

Leaders, especially, young, freshly-graduated, newly-minted, recently-appointed, and still wet-behind-the-ears should adopt an attitude of teachability, be humble and seek the counsel of those who have gone before them.

And the public should have a say on their appointments and their tenures. We must trample out the vintage from which imperfect grapes were planted!

Let not the authorities forget that we pay tax plus didn’t they just say that the voices of the silent majority (beyond the loud and noisy minority) should be heard as well?