The Ballsy, The Ball-less and Our Rightful Response

When crossing swords with one of the most corrupted politicians in Malaysia Karpal Singh said “You can be the lion and I can be the tiger, because there are no lions in Malaysia.” The moniker stuck and from then on he was often referred to as the “Tiger of Jelutong.” (He was Member of Parliament for Jelutong.)

More pit bull than tiger, Singh spent over three decades being a thorn in the side of the ruling coalition. Not a single politician in Singapore could be compared to him. Where are the men and women of Singapore who stand up for their principles nowadays? Men and women who are prepared to make genuine sacrifices, even go to jail for what they believe in? (Instead of pencil-pushers with fancy degrees and obscene salaries.) Karpal Singh, son of an Indian Punjabi immigrant to Malaysia, had received death threats, been arrested, charged and jailed yet he continued to take on tough, controversial cases fighting for those whom he felt were wrongly accused. He would not hesitate taking on even the Malaysian king, (who named one of his dogs after him) or dictatorial strongmen like Mahathir, who told him that he was “the most contemptible of politicians and individuals.”

Karpal Singh was known for being a principled man, a giant with an indomitable spirit. He died in a car accident last week. He was 73. Thousands showed up for his funeral.

His name “Karpal” (which means “kind” in Punjabi) sounds like the Malay word “kapal” meaning “ship” and while Karpal Singh has passed on, his reputation will continue to stay afloat like an unsinkable ship. 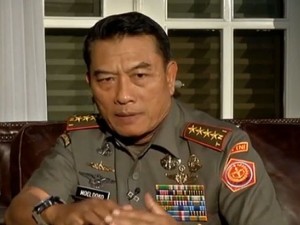 The dickhead has clarified that, in his interview with Channel NewsAsia last week, he had not apologized to the Singapore Government for the naming of a warship after the Indonesian marines who infiltrated into Singapore and bombed MacDonald House in 1965, killing three and injuring over 30.

Instead, said the general, the apology had been for the fact that the decision to name the ship Usman Harun was final and would not be changed.

On TV he was shown saying on record “Once again, I apologize. We have no ill intent whatsoever to stir emotions; not at all.”

Following the airing of the interview, Gen Moeldoko posted a link to the Channel NewsAsia story on his Facebook page. There was a backlash in Indonesia. He was questioned by some Indonesians as to why he had apologized.  His “clarification” soon followed.

What should our response be?

Honestly, we’re big enough not to require an apology (sincere or otherwise) just to show that the other side has capitulated. We don’t thrive on those things. Those are the little things little people get mired in.

We are more than conquerors. We are Singaporeans. We stand on high moral grounds.

We are not like those bloodthirsty Indonesian peasants-turned-butchers in Joshua Oppenheimer’s The Act of Killing.

We should focus on being a flourishing nation with a cultured citizenry and equipped with world-class capability to defend ourselves against intruders and modern day conquistadors.

Success, after all, is the best revenge!

Let the little people continue to talk through their asses by all means and let them drown in their own cesspit of jingoism.