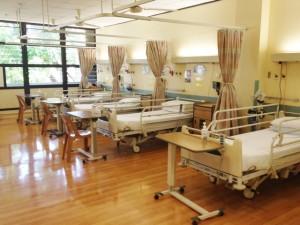 I found his bed.

But there he was. In bed 20. Dressed in hospital garb whose brownish color must have been chosen by someone very miserable and whose wish must be for others to be even more miserable. Or was it to match the drapes?

His hair appeared matted. Well, he has been lying in bed for a week, what did I expect?

His hair color that awful shade that happens while one’s hair is transitioning from black to white.

Unshaven, stubble on his chin.

“Fourth Uncle,” I touched him gently on his arm as I addressed him respectfully.

He seemed a little startled, then he smiled when he realized it was me.

“Three o’clock,” he said, then he sighed again and shook his head.

“Not to worry,” I assured him, “it’s just gall-stones; probably key-hole lah, my father had the same surgery before. And after they’re done, they’ll give you the stones in a bottle, you know.”

Then I didn’t know what else to say.

So I continued: “I myself may have to go for an op soon, to fix my slipped disc. Major surgery this one, brutal, like killing pigs like that.”

He made a face, winced.

I did a quick scan of the room and spotted a chair at the foot of his bed.

“You’re off today?” he asked and I nodded my head.

“Where you work now?” he wanted to know. I told him I was with this company for 10 years but just left a little over two years ago. “Doing bits here and there now,” I added.

My Fourth Uncle, my father’s youngest brother, known to be a quiet man (albeit often seen with a frown and a thousand-yard stare) but who could be a bit of a character in his youth, and me his nephew – apparently we didn’t know what to say to each other, other than polite superficial chitchat.

I had heard that what he has been saying lately doesn’t always seem to make sense, that he may be gravely ill, that a couple of weeks ago, he went “missing” – walked out of his home one evening, only to return the next morning and couldn’t really explain where he went. Early signs of Alzheimer’s?

I have also heard that things are not that great between him and his wife.

From my dad and my third uncle, I hear stuff about our extended family.

Nothing really alarming of course.

But a lot of sad stories, nevertheless.

A couple of aunts are not doing too good apparently.

I learn of the family from my father and my third uncle, from the talk of concerned old men with hearts heavy for the clan, especially for the plight of the less fortunate ones among us.

“Your father is really healthy,” said Fourth Uncle somewhat wistfully. He seemed to imply “And look at me, I’m his youngest brother, but I am a wreck.”

“Yes, my father is 83 and doing fantastic for someone his age,” I responded, “and he has two balloons in his arteries you know, yet he still loves to eat fat pork, pork leg and all that unhealthy food. Cooks a huge pot each time and wallops the whole thing all by himself.”

“I have retired,” he said. And he shook his head again. “Damn boring. More than 10 years with SMRT. Nothing to do now.”

“Well, you have to get out of the house,” I suggested, “my father has lots of friends he visits with and he’s always up and about. He keeps active.”

After a while I asked “How old are you now, Fourth Uncle?”

“You know what, Fourth Uncle? I’m 57. Can you imagine? I am 57 now. Unbelievable! Time flies huh? My mum has passed away for 21 years already. And I have a son who just went into National Service and one more going in June.” My words came out in a torrent, perhaps to stem the flow of silence that I was somehow anticipating.

“Yup. What to do, government stupid what,” I said, putting on a show of being indignant.

He didn’t respond to my dig at our government.

I almost wanted to cry.

My parents were the first to leave the farming village or kampong near Tuas in Jurong to move to “town.” Soon many of the relatives who left the old homestead to seek their fortunes downtown would stay with us. My third uncle stayed with us first, but only for a short stint. Then came Fourth Uncle, as well as a brother of my mother. There was also an older relative called Uncle Hong, a great raconteur. My father used to joke that our house was like a community center! Every night my mother would cook lots of food, the men would talk animatedly on top of their loud voices and I would pretend to do my homework while listening to their conversations. The lessons learnt were more invaluable than what my textbooks and primary school teachers were trying to teach me at that time. Those learnings stay with me till today.

During the speechless interlude my thoughts wondered to another time and another place.

My memory flashed back to a time when, as a kid, I would go with my parents to visit my grandparents in the kampong during weekends. I recalled how during one of those visits Fourth Uncle, who lived with my grandparents before coming to stay with us later, coached me to shout something to Ah Tee who lived in a house nearby. The result was that shortly after, Ah Tee came running with a huge basket of ripe, juicy red jambu (Syzygium malaccense) for me to eat. But it was Fourth Uncle who then proceeded to devour almost the entire basket of jambu, juice dripping down his chin, while I watched and salivated.

Fourth Uncle, whom I often bullied when I was a child. During one visit, I even jokingly chased him with a kitchen knife, forcing him to hop onto his bicycle to dash to the kampong store in record speed to buy me a ballpoint pen I had demanded he give me.

Fourth Uncle, the joker who once took my hand, placed it on his butt and farted into it.

Fourth Uncle, whose surprisingly, soft, tender side we all saw when he was courting his wife.

I felt odd, sitting next to him, looking at this oldish man whom I can hardly recognize and with whom I was now trying so hard to connect, or rather, to re-connect. After so many passing years, have we exhausted our conversation topics?

Two of us have lived a total of 128 years so far and we have nothing to talk about?

Each of us in our own thoughts.

Neither of us had anything more to say, it seemed.

“Very warm,” he muttered. Tiny beads of perspiration formed on his forehead.

“Is there anything I can get for you, Fourth Uncle?”

He shook his head.

“Not allowed to eat,” he said, “operation later.”

“Is your doctor young or old?”

“Middle age, but lots of young fellas around,” he said, with a disapproving expression on his face.

“Yeah,” I said, “some of these young ones damn arrogant some more.”

“Yeah,” he nodded. Then, a slight shake of his head.

I spotted bottles of chicken essence on his bedside table, and I thought I also noticed a couple of bottles of bird nest in a plastic bag. Typical stuff Singaporeans of the older generation bring to those in hospitals, along with Jacob biscuits. Indication that some of the aunts must have visited.

Suddenly I felt a tinge of regret, perhaps I ought not to have visited empty-handed.

As if to assuage my guilt, I again asked Fourth Uncle, if there was anything I could get for him and assured him that I was more than willing to do downstairs to the stores to purchase for him whatever he might need.

We both continued to contemplate in silence.

At that point in time, I thought I had a moment of epiphany.

I thought there was actually no need for words. The blood flowing in our veins is the same blood.

Showing up and being there in person was more important than meaningless talk, right?

But truth be told, my heart was grieving.

How do relatives grow so far apart, I wondered.

After a while, afraid that we might both start to squirm with awkward discomfort, I told him in the gentlest possible way “I’ll make a move now to let you rest. Now, make sure you rest well, ok? And don’t worry about anything ok?”

My Fourth Uncle nodded his head, and with sad eyes looking at me, he said “Thank you for coming.”

“Thank you for coming,” he said again.

I walked away feeling gloomy. Melancholia hung over my head like a dark cloud.

He didn’t need to thank me.

Visiting him was the right thing to do. It was my duty as a junior to visit an elder.

But he thanked me.

Not once, but twice.

I felt so inadequate, shameful and despondent.

I thought of someone I know who couldn’t stop boasting about living it up in a single suite in Mount Elizabeth Novena and dining on lamb shank, making even hospital stays seem like glamorous fun, as if he was on a cruise on the Queen Mary.

But my Fourth Uncle, a decent man who worked hard his whole life to provide for his family, was in a public hospital, stuck in a humid and putrid 8-bedded ward without air-conditioning. I bet he hasn’t tasted lamb shank in his entire life.

And I, a smug, conceited, unfilial and absent nephew, was more preoccupied with my own wretched feelings.