From Debauchery to Virtuousness: Brunei Regresses 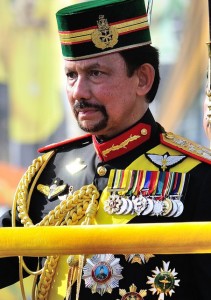 He lives in a 1,788-room palace and on his 50th birthday he paid Michael Jackson US$17 million to perform.

His brother is infamous for having been embroiled in notorious scandals that would give even Giacomo Casanova a red face, including naming his luxury yacht “Tits” as well as facing allegations of maintaining a high-priced harem of Western paramours, if Jillian Lauren’s book Some Girls: My Life in a Harem is to be believed.

Last week, apparently under the influence of his very own Gríma Wormtongue (in the form of Malaysia’s leading Islamist opposition leader Nik Aziz), Sultan Hassanal Bolkiah of Brunei introduced hudud – an Islamic penal code that calls for death by stoning for crimes such as adultery.

Most of the laws will also apply to non-Muslims.

Celebrities including Virgin group founder Richard Branson have vowed to boycott a hotel chain linked to Brunei’s sultan after he introduced a controversial Islamic penal code in his country.

“No @Virgin employee, nor our family, will stay at Dorchester Hotels until the Sultan abides by basic human rights,” the British billionaire posted on Twitter.

Others who have called for a boycott include comedian Stephen Fry, TV host Sharon Osbourne and comedian Ellen DeGeneres.

The US group Feminist Majority Foundation said it had also pulled its annual Global Women’s Rights Awards, co-chaired by Jay Leno and his wife, from the Beverly Hills Hotel, part of the Dorchester group of hotels, in protest.

I seriously doubt if the boycotts will cause a dent in the Sultan’s finances but at least the point is made.

Isn’t it ironic that self-appointed custodians of our conscience often themselves lead the most depraved of lives?

Once a person’s virtuousness is seriously called into doubt, he loses his authority as a moral leader.

I am reminded of those sick Catholic priests. It was just revealed that the Vatican has defrocked 848 priests over the past 10 years, and doled out lesser punishments to another 2,572 accused of raping and molesting children. There is a very special place in hell reserved for such monsters and their ilk. May these wolves in sheep’s clothing burn in hell for all eternity!