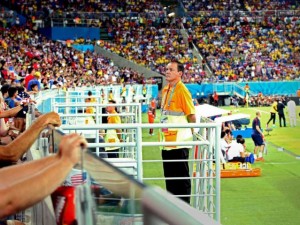 Not allowed to watch.

So the World Cup is over.

What a sigh of relief it must have been for bosses.

Enough of bleary-eyed workers showing up in the morning half comatose and pretending to be bright-eyed and bushy-tailed.

Some of my lotus-eating friends are already talking about the next World Cup.

They lament about how they ought to have gone to Brazil in person this time. Brazil, the spiritual home of football, a nation that many view as guardians of football’s soul.

They are planning to be there physically at the next World Cup.

I’m not sure where.

I’m not a fan and I don’t really care.

These friends of mine remind me of those few in any population who got lucky, made their money, descended into banality but are now beyond wealthy. They have nothing much to keep themselves busy so they can hop onto a private jet at a moment’s notice to be anywhere in the world.

Some people are like that. Not a care in the world. The sheer prosaicness of their lives chills me to the bones. Imagine a life devoid of challenges.

Others have to exercise judgment – like the referees at the matches. Who to show the yellow card, when to reward a penalty kick, who to send off the field. When to consider eating at a restaurant, when to eat at the food court instead. When to feast on Kumamoto oysters, when to settle for cockles.

Some are key players – paid millions to kick a stupid round ball. Lucky bastards, but I don’t envy them. I mean if you’ve got what it takes, sure, cash in on it, not everyone can be a soccer star and life is short, isn’t it? In a world blinded by success and wired only to recognize superstars, goals and achievements matter. But I could do without the pressure that these demi-gods must feel. Imagine living with all those expectations and having only your brains and legs to ensure that you deliver.

Some are merely the plebeians, and always will be. There was a group of people who were right there in every match, right in the thick of the action but they were instructed to face inwards staring at the spectators instead of at the match. These were the security guys, who could not enjoy a single match but had to stand and stare at those enjoying the game. They were assigned to maintain order inside the throbbing stadiums by keeping their eyes firmly locked on the stands, not the field.

Clad in neon orange vests, these guards stood sentry by the field at every match, arms clasped behind their backs, eyes locked 180 degrees away from the grounds where the likes of Gotze, Messi, Xavi and Neymar were capturing the world’s attention.

And talking about spectators, aren’t we all spectators? We can’t all be doing something all the time, sometimes we all have no choice but to sit back and watch life go by helplessly.

Not all of us can be players.

The sad thing is sometimes, life does pass us by rather quickly.

And before you know it, it’s curtains.