The Case of the Fishball Stick 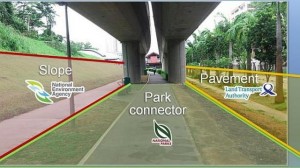 The Prime Minister in last night’s National Day Rally mentioned that Southwest District mayor Low Yen Ling, while investigating why a walkway in Bukit Gombak had not been cleaned, found out that three different agencies managed three different parts of the walkway.

A fishball stick had fallen on the roadside to the right, which was cleaned every two days.

The stick was left there for two days and the poor mayor was driven from pillar to post trying to fix the problem!

So to prevent similar type occurrences, a Municipal Services Office will be set up to get different public agencies to work more closely together, the Prime Minister said last night.

He welcomed the setting up of such a central office, which he saw as a “cockpit” from which to ensure that nothing falls through the gaps.

All well and good.

My question, however, is “Since the fishball stick fell on a busy thoroughfare, and though just a little stick, it was obviously noticed by passerbys – at least one had actually bothered to contact the authorities to have it removed – why didn’t somebody just pick it up and throw it into the rubbish bin?”

Isn’t picking up the stick and throwing it away a whole lot easier than picking up the phone and trying to get the mayor to contact various government bodies to request them to remove the stick?