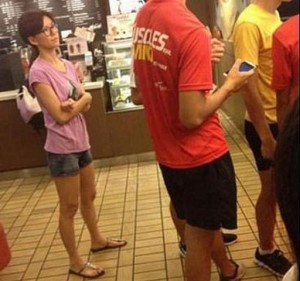 After speaking on camera about the recent beheading of a freelance American journalist, US president Obama went to play golf. The following day he played golf yet again.

Critics went into a frenzy.

They called him insensitive, tone-deaf, etc and those were the printable words.

In Japan prime minister Abe played golf too, just after the recent landslide disaster in Hiroshima.

Here in Singapore, artiste Stephanie Sun was pilloried for being seen standing in line at a fast-food joint dressed just like most Singaporeans at fast-food joints – in T-shirt, shorts and sandals.

I read an advice that regardless of who we are we have to wall off our feelings and compartmentalize our lives. We need to be detached, and unemotional at times; we must guard against being consumed by emotions of the situations we confront.

Remember we are not babysitters. And people also resent us for babysitting them!

For Obama, if he wanted to show by his golfing that no enemy can hijack his schedule, he was also trying to show the world that he disdains the politics of appearances.

Too many today are obsessed with showing off.

Facebook and Twitter are full of retards and losers – and generally very insecure people – showing off their latest purchases, visits to vacation spots, expensive clothes they wear, rare single malts they quaff, how they stuff their faces with gourmet cuisine and how they are decadent – meaning “idiotic” – enough to eat expensive durians together with caviar.

Been there, done that. (Except juvenile stunts like stuffing my face with durians and caviar at the same time.)

I’m not shy. I’m just holding back my bragging because I don’t want to make you feel small and stupid.