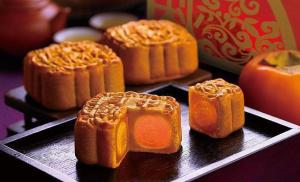 Today, day 15th of the eighth month of the lunar calendar, is the Mid-Autumn Festival. Eating of mooncakes, (made largely of lotus seed paste), is one of the hallmark traditions of this festival, along with moon gazing, the carrying of lanterns and the telling and re-telling of the many folklore associated with the festival. Baby yams, water caltrops, pomelos and Chinese tea are the other foodstuff consumed during this period. But mooncakes take the cake.

My favorites are those from Hong Kong, especially Mei-Xin mooncakes. (I like those with salted egg yolks inside.) The bakery that produces Mei-Xin mooncakes says it makes 45 million of them a year. Kee Wah in Hong Kong also has nice mooncakes but if it’s the good old-fashioned traditional ones that you’re after, then Lin Heung in Hong Kong is where you want to go. In Singapore check out Chop Tai Chong Kok at Sago Street, or Chinatown Tai Chong Kok Confectionery (Hue Kee) at Banda Street.

Younger people prefer those fancy, uber expensive ones made by hotels. Some are even stuffed with durians and what not. Even Starbucks has gotten in to the act and sell their own versions of mooncakes. In 1986, Spring Moon restaurant in the Peninsula Hotel in Hong Kong created the custard mooncakes and Tai Pan, a Hong Kong bakery chain, invented snowy mooncakes, a frozen mochi-like concoction in 1989. They were the pioneer creators of these new generation mooncakes.

How popular are these new-fangled mooncakes? Well, this August, in Hong Kong, Spring Moon’s custard mooncakes completely sold out in five days!

China’s crackdown on corruption might mean that mooncake sales will drop this year – traditionally the Chinese add other extra gifts like Rolex watches inside mooncake boxes as gifts to officials – but still, industry groups estimate that mooncakes bring in US$2 billion worth of annual sales in greater China.

But with at least a thousand calories per mooncake, waistlines are going to get bigger too this time of the year.