Riding into the Sunrise 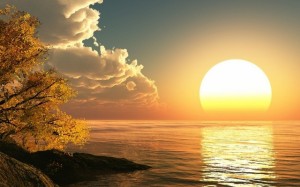 I yearn for those times when corners were not cut, when the world was a much carefree place, when friends and intimates could be relied upon, when promises meant something, when people didn’t rationalize away their behavior and justify their actions with a shrug of their shoulders, often with a veneer of self-righteousness, and disingenuousness. I crave for chimneys emitting pine-scented smoke and I miss the smell of the sea, of hot Gyokuro and crackling logs in the fireplace.

Often when the rubber hits the road, when the gravel crunch under the tires, often when the birds in the sky shriek as they fly past you, the moment of realization sinks in, and you know, you know, and you won’t ever forget, you won’t ever be defeated, you know in your heart of hearts, you have overcome, you are triumphant, you leave the chaff behind, you walk away from the obsolete relics of an undesirable past, you stride forward with renewed vigor because you, and you alone, are more than a conqueror and the brave new world is yours.

Mourn not for the ravages of the past, long not for relics of what was and what could have been, revisit not prior fragments of dissatisfaction, lay what happened to waste, tomorrow can be exactly what you determine it to be.

A new morn is dawning.

I am not leaving you behind.

Unless you have already left to pursue your own sunrise.