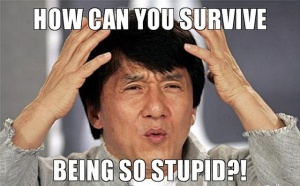 30 years of marriage and I am no closer to understanding my lovely wife 100%.

I do catch some clues of what she wants though from her body language and from the things she says.

If she says “We need to talk” it usually means she has something to question me about that I won’t enjoy hearing, like why on earth did I purchase yet another expensive camera that I don’t need and will never use.

If she becomes unusually solemn and says “nothing” when I asked if something’s bothering her I can be sure probably something is indeed troubling her – could be her work, her siblings, whatever.

Sometimes when she says “no” to me, I know she actually and secretly means “yes.” I am sure if I ask her “Can I get you a big diamond solitaire on our wedding anniversary?” she will say “no, please don’t spend money like that” but if I really go and get her a diamond the size of a golf ball, I’m sure she’ll squeal with delight.

(Human beings ARE complicated. I myself can be very difficult too.)

And if my dear wife asks me if she looks fat, I know it’s time for me to reaffirm to her that I love her no matter what her size is. (She is NOT fat by the way – at 56, she has the body of a teenager, but most of the time she thinks she’s Jabba the Hutt.)

Gender differences and how men and women communicate – and miscommunicate – is the fodder of many books and have made jokers like John Gray (who graduated from the same uni as me) and clowns and pseudo-experts like Allan Pease rose to a celebrity-like prominence they don’t really deserve. (Books by Desmond Morris and Deborah Tannen are more credible reads.) I am not talking about sexual stereotyping here, I’m just stating facts. Men and women are wired differently and we communicate differently. Words cannot always be taken at face value. And just because someone points out some of the common differences doesn’t mean he or she is engaging in sexual stereotyping.

Some of these “she-actually-means-this-when-she-says-that” quotes are listed in a publication used by an organization engaged by the Ministry of Social and Family Development to run relationship courses for students.

A 17-year-old student from Hwa Chong was so enraged by the publication’s contents that she accused the organization that was appointed for promoting a rape culture. (Because “no” means “yes”?)

Dear wet-behind-the-ears brat, let me tell you this: You have NO frigging idea what rape is, and I sure hope you never have to find out; also, with a thinking process like that, I wonder how the hell you got into a supposedly good school like Hwa Chong?

Shuddup and try to grow some brains for a change. And stop embarrassing yourself.

Of course, needless to say, many equally clueless keyboard warriors couldn’t resist the bait and seized upon the opportunity to attack the Ministry, and the government, and just about everyone and everything else, except their own severe lack of discernment.

And of course many, fearful of losing their jobs, or getting screwed for one reason or other, started scrambling to cover their asses and to blame everyone else but themselves for allowing the program into our schools.

My dear Singaporeans, politically-aware and bright Hong Kongers are sleeping in the streets for their rights and some of you guys, especially those of you with zero intellectual firepower, are just wasting space, farting around, busy engaging in mental masturbation, and spending nearly 500 bucks looking for a lost soft toy. Tsk, tsk. Only in Singapore. (Yesterday’s papers carried news about how after eight hours combing MRT stations along the East-West Line and spending close to $500 on lost-and-found ads, a 23-year-old is still desperately looking for a companion – a soft toy – which had been by her side for the last 17 years.)

The majority of Singaporeans are decent and sensible but the number of idiots and parasites seem to proliferate these days. And please don’t mention those cretins in the same breath as the brave students in Hong Kong. Indeed, don’t equate the Hong Kong pro-democracy activists with some of the comedians we have in our midst. And I beg of you, please don’t remind me of that nut case, that self-styled “genius-with-the-charts” who accused the prime minister of embezzling our retirement funds. Or that retarded blogger who had no qualms frightening special-needs kids by allowing a rally she was leading to encroach into a charity carnival where these kids were performing.