The Paper Chase – A Matter of Degrees 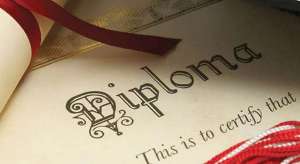 At this year’s National Day Rally in August, the prime minister highlighted some individuals who despite a lack of university degrees rose to prominence in their careers.

Since then, talking heads, aided by the media, have been sending forth the message that a university degree is not everything, that we have to look past paper qualifications and all that.

Almost on a daily basis, we are bombarded with such brain-washing.

The government and its mouthpieces have reasons – probably self-serving and insidious – for propagating that falsehood.

Now don’t you fucking believe that.

What an irresponsible government it is to tell its citizens to look beyond paper qualifications and to inevitably send the fatal message that professional qualifications are not all that vital.

It might as well line us up, give us a free shower, and then send us to the ovens, the way that other guy who attempted social engineering did some 70 years ago.

A qualification – academic or otherwise – is essential. It is a form of insurance.

You may not need or want to use it – I mean, lawyers have become actors, doctors have become salesmen, PhDs have become taxi drivers, psychologists have become cooks and a mathematics major is now our prime minister – but acquiring a professional qualification is still useful.

I am reminded of the Vietnamese boat people of the late 70’s. Many of them who were lucky enough to survive and land on foreign shores had only the tattered shirts on their sunburnt backs, but it was their professional qualifications that ensured them of a more secure future.

So don’t you think for a moment that it is ok to abandon your quest for a professional qualification; go for it! If you don’t have a paper, study for one. The classroom time and the opportunity for personal development is priceless. It’s ok if what you eventually do for a living has nothing to do with your degree or diploma, but at least you know, you have a skillset that is locked away.

Knowing our government, give it another couple of decades, and they’ll be condemning people for not pursuing professional qualifications. History can attest to their changing of positions. And who suffers? Not those fat cats in government, not their brown-nosing toadies, not those big mouths you see on TV. YOU, my friend, will be the one suffering.

I’m a simple man with simple views, but mark my words indeed. Don’t get screwed!

Don’t you ever stop your quest to pursue an asset nobody can take away from, a means of livelihood that is useful anywhere in the world.