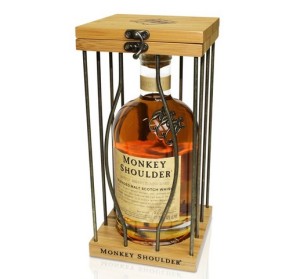 The whisky takes its name from the injury suffered by those manual laborers in the olden days who painstakingly turned malting barley with big wooden spades during the whisky making process. This posture had the tendency to cause their arms to hang down a bit like a monkey’s, so they named the condition “monkey shoulder.”

The concoction is supposed to have a delightful nose of sherry, cinnamon baked pear, butterscotch, barley, strawberry and Bourbon vanilla which are all complemented by tangy, sweet nut, citrus, mint, oak and orange peel flavors.

Reviews, however, are mixed but one thing I have to agree is that the packaging is rather clever indeed.

It looks like King Kong’s about to escape from its cage!