Number One Whisky-Drinking Country in the World 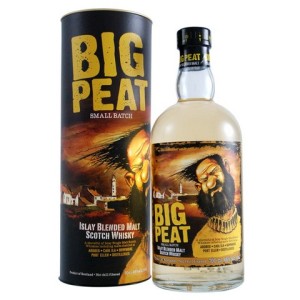 Back when I was Mr Ignoramus quaffing cheap hooch, when I heard someone using the term “triple malt whisky” I scoffed, thinking it was a lame attempt at oneupmanship – the “you drive a BMW 5 Series, but I’m being chauffeur-driven in a BMW 7 Series” kind.

But I’ve since learned. (When you stop learning you stop growing right?) There are single malts mixed together in a blend and some marketing people have termed it “triple malt” – a wrong choice of words, if you want to be technical, because the moment anything is blended together, it is just blended, even if it’s a blend of three single malts. But for those hung up on definitions, blended malts combine the single malts from two or more distilleries and occupy the ground between single malts and blended Scotch whisky. (Chivas Regal, for example is a blended Scotch whisky. Ballantine’s is another blended Scotch whisky.) The term “blended malts” was only standardized in 2009 and further bewildered – some might even say, bamboozled – Scotch enthusiasts because these concoctions were also often confusingly labeled as “Vatted” or “Pure Malts.”

In my last post I wrote about Monkey Shoulder, but there are other triple malts around.

One I like is John Walker & Sons Odyssey, blended by Johnnie Walker’s Master Blender, comprising a blend of three single malts.

I’m sure the Master Blender, Jim Beveridge – with more than 8 million barrels of whiskies aging in numerous warehouses throughout Scotland – would have quite a headache trying to decide just which three of these casks to choose from to craft a superpremium, super-refined vatting. But he managed to pull it off, and the result is a taste sensation quite out of this world, that is, if you are fortunate enough to be able to get hold of a bottle.

The other triple malt worth trying is Douglas Laing’s Big Peat. From the distillery’s literature, Big Peat is a feisty Islay character who has a sweet side too – he carries a big peaty (“phenolic”), beachy, oceanic, rather ashy selection of malts only from the island of Islay…you will detect a massive amplification of sea-faring qualities on the nose, palate, and finish…

Of course one must be naïve to think that there’s a single (super?) human being out there with the ability to discern all those supposed nuances in a dram of booze! But part of the fun of drinking is to discover for yourself what it is that your palate can actually detect!

And from yet another distillery, William Wemyss, comes the following blended malts: The Hive, The Spice King and thirdly, the Peat Chimney – all worth a try.

Americans always talk (and very loudly) as if they know everything but – according to the latest statistics (see chart below) – they drink less than half a bottle of Scotch per person per year; this is pale in comparison to Singapore, we drink nearly 13 bottles per person annually.

Trust me, we Singaporeans know what we are talking about. Many of my friends consume at least a bottle of Scotch a week. And I’m not talking about cheap shit. I’m talking about the real good stuff – the real rare superpremiums!

The increase in sophistication in Singaporean aficionados is driving more demand; in fact, some brands, like the Bruichladdich, is made available exclusively in Singapore first, then in Tokyo, Taipei, Shanghai and Hong Kong and eventually to the rest of the world later. 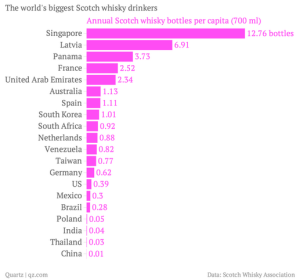