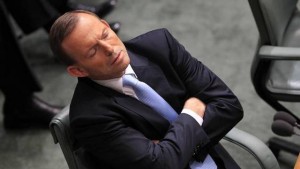 If Indonesians run drug-rings in Australia I’m sure they’ll be punished to the fullest extent of the law, if caught.

Now two Aussies are on death-row for doing precisely that in Indonesia, as well as for attempting to smuggle heroin back into Australia, and yet, Australia’s moron-in-chief Tony Abbott is posturing (for an equally retarded audience “down under”?) throwing epic tantrums and making all kinds of threats to Indonesia, where it is estimated that as many as 50 people died each day last year from drug abuse.

Ironically it was the Australian police who tipped off the Indonesian police about the “Bali Nine” – yup, go figure that one out!

Whatever. If you do the crime, you do the time. You pay for your crimes. No matter what country you are in, you commit a crime, you jolly well face the consequences. (In the case of Indonesia, it’s the firing squad for drug trafficking.) Drugs are worse than poison and Abbott wants those two of his country men pardoned?

The same can be said for Brazil – its president Dilma Rousseff is kicking up a big fuss over one of her lowlifes who was sentenced to death – exterminated for the good of all of humankind – for drug-related crimes in Indonesia.

Now, how about some Indonesians running some drug trafficking deals in Brazil or is the country so frigging corrupted and morally decayed that life is so cheap so drugs don’t mean shit anymore?