None but the Lark so Shrill and Clear 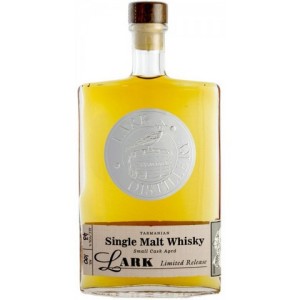 Collecting and drinking single-malts from all over the world is a lot of fun. The Japanese, Swedish, Taiwanese and the Indian ones have never failed to thrill. Some have even won awards. Browse around this blog for my posts on those single-malts.

In Sydney last week I was gifted a bottle of Lark single-malt from Tasmania.

Although distilling of spirits is not new in Australia (Lark Distillery was the first licensed distillery in Tasmania since 1839) single-malt production in Tasmania is a relatively recent thing. It was started in the mid-1980s by Lyn and Bill Lark, using pure mountain waters, premium quality Franklin barley and fragrant highland peat. The Larks use hand crafted copper pot stills for distillation and maturation was done in small quarter cask oak barrels. These small barrels have a larger surface area in relation to their volume compared with the larger barrels used elsewhere. Both aspects of aging (evaporation of volatile esters and interaction with oak character) occur in a shorter maturation period than that of the more common larger barrels used in Scotland.

The whisky is lightly peated and resembles a Scottish Speyside or Highland single-malt.

Lark consistently distills some of the world’s most prized whisky, with no more than 100 liters at a time. So a bottle is a rare treat!

Thanks, Ian Baxter for the much treasured bottle of Lark!