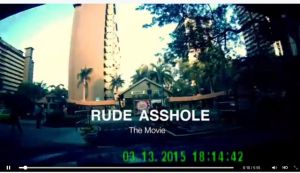 So a monster with shit for brains got into a cab driven by a man who has a daughter who works in the media industry.

The retarded Mongoloid berated the taxi driver nonstop throughout the journey for a number of reasons. He was raging away and truth be told, if I were that taxi driver, I would have re-arranged his face, crime or no crime. His mum wouldn’t be able to recognize him when I’m done with that motherfucker. That bastard deserves no less, to be honest. He has his lucky stars to thank that I’m just a keyboard warrior not a taxi driver, not that taxi driver.

Taxi drivers earn an honest living; sure there are bad hats, but most are honest people working hard under difficult circumstances and facing unreasonable, hostile and unfriendly passengers day in and day out just to put food on the table, to provide education for their children and to pay their household bills. They are not beasts of burden for people to yell at.

The in-taxi video was posted online by the taxi driver’s daughter and the moronsphere went into overdrive. The clip has been viewed a gazillion times online and response from outraged netizens have been fast and furious with some digging out and revealing the nasty passenger’s personal details after playing amateur Sherlock Holmes.

I for one believe that the asshole passenger deserves his comeuppance; I too am incensed by his totally uncalled-for behavior – in this post, I’ve since labelled him “monster with shit for brains” and “retarded Mongoloid” (I know, offensive to many) and “motherfucker” and “bastard” and “asshole” and those are my more polite names for him, but to be honest, I am also a tad disturbed by it all.

I’m not sure Internet vigilantism is the way to go. We have driven Anton Casey and Amy Cheong out of our country and brayed for Jover Chew’s blood, but is a little self-restraint in order? “Righteous indignation” gone too far is a slippery slope and can prove dangerous; often the road to hell is paved with good intentions. Any action arising from a fit of pique is seldom positive. I also wonder if we have become so thin-skinned and intolerant and worse, completely unforgiving? Or do we resort to such public shaming only because our hallowed institutions and august bodies with their noble aims have failed us, with the result that we have to resort to public lynching of those who pissed us off? Have we taken things into our own hands because those whom we trust to protect us have let us down so miserably? Also, have the years of Courtesy Campaigns and efforts like Singapore Kindness Movement not been effective?

The poor, defenseless taxi driver was mercilessly bullied and scolded for no rhyme or reason but the video uploaded by his daughter was titled “RUDE ASSHOLE, The Movie” and was presented “In Association With Fat People, Inc” and ended with “And you Chai Chee Prick. FUCK YOU.” Hardly polite words, and why the sneak attack on fat people?

Didn’t Nietzsche once warned that whoever fights monsters should see to it that in the process he does not become a monster himself?

I’m not suggesting that we turn the other cheek all the time, but as Singapore is celebrating our 50th birthday this year, let’s recognize that the winds of change are blowing and the choices we make will determine whether Singapore becomes a cancerous red dot that is doomed for destruction or a bright shining red dot that is a beacon of light in a dark world of nastiness, spite, revenge, pride and lust.