Food sellers at the basement of Westgate at Jurong East face tough competition. Though the mall is higher end compared to its neighbor JEM, and Big Box and the nearby JCube, there are literally hundreds of places in these three locations where shoppers can eat – from little eateries to the many stalls in the several food courts to restaurants big and small.

If Hajjah Mariam hadn’t had a brainwave last July her little café in the basement of Westgate would have probably closed by now, just like so many others.

Hajjah – the honorific is bestowed on Muslim women who have performed the Haj – decided to focus on Nasi Ambeng. Nasi Ambeng is basically a Malay dish often served at Malay Kanduris or feasts – a huge metal or plastic platter is lined with banana leaf, the center spot is occupied by fragrant rice, and all kinds of delicious morsels, like chicken or beef, are placed on the platter and several people would sit around to share one platter. Best eaten with your hand the dish is delightfully tasty and promotes bonding and fellowship.

Hajjah Mariam decided to sell it and created a menu with different prices for each size of Nasi Ambeng. The cheapest are the solo platters of $8/- or $11/-. (Click on picture to see better.) 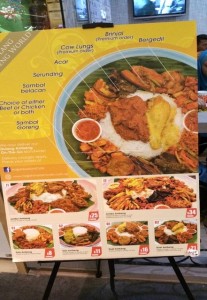 Here’s Hajjah Mariam (center) with her daughters holding up various sizes of her Nasi Ambeng: 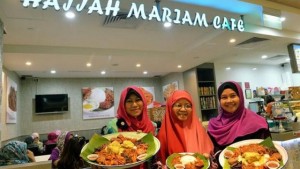 This is the $16/- platter I tried; good enough for three small eaters: 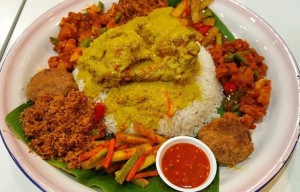 With the introduction of Nasi Ambeng, the rest, they say, is history. The cafe is packed every meal time, often with long lines of customers waiting.

For now, as far as I know, this is probably the only place in Singapore to partake of this wonderful dish. But this being Singapore, before long, copy cats will emerge, but if you want the original, head out to the basement of Westgate and check this dish out.

Be sure to go early to avoid the long lines.

UPDATE: About a week after this post was published, I was told by a taxi driver that there’s another Nasi Ambeng stall at Changi Village that probably began operations some time before Hajjah Mariam started selling hers. I have also since learned the the dish first made its appearance here back in 2010 and that there are now at least five eateries serving it.