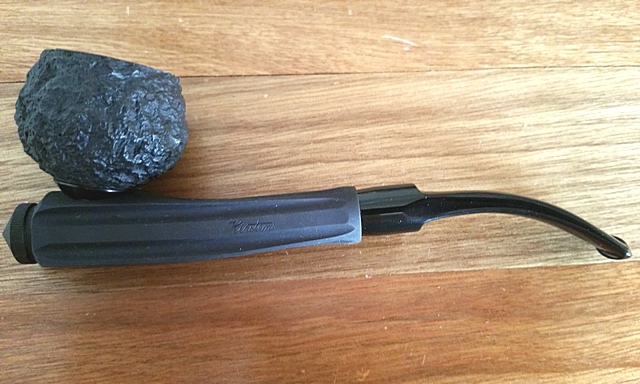 University of Washington Professor of Aeronautical Engineering, Frederick Kirsten revolutionized pipe smoking by creating the radiator stem. When tobacco, which is 30% to 60% moisture, is lit in the bowl, it creates steam. As the smoke is drawn through the stem, the steam is cooled and condenses into a liquid. This bitter-tasting liquid is trapped in the stem, along with tars, nicotine and tongue-biting acids.

The theory is that with Kirsten pipes, only clean, cool, moisture-free smoke passes through the intake tube to the mouthpiece. To remove the trapped liquid, one simply remove the valve. Also, any smoker can clean a Kirsten in seconds by pushing a tissue through the bore of the stem, exactly as one would clean a gun barrel.

Interchangeable bowls (a la Falcon) in briar and meerschaum make it all the more interesting.

When did the company start? No one knows for sure. US patent office records an application dated back to 1938, but things in the pipe and tobacco world change fast – do you know that Samuel Gawith is now part of Gawith Hoggarth again? – and, not surprisingly, the Kirsten pipe company today is a poor shadow of its former self. Production has halted and emails rarely get answered. One hears that the machine shop that made the pipes is geared up to restart but we’ve been hearing that for the longest time. Still, to collectors, Kirsten pipes are worth something, and there’s always eBay.

Picture above shows a recent acquisition.