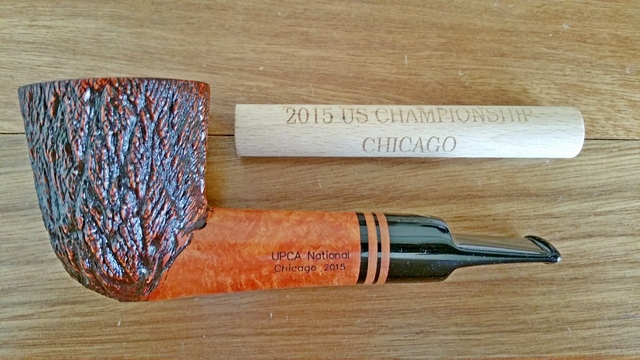 140 participants took part. After payment of a nominal fee, each contestant was given a Luigi Viprati pipe, a tamper, 3 gms of tobacco and two matches.

Each contestant had five minutes to fill the pipe, one minute to light the pipe with one or two of the matches and the smoker whose pipe stays lit the longest is declared the champion.

At the 45-minute mark, I was the only one at my table still puffing away.

But my pipe “died” at 58 minutes. At that time, out of the 140 participants, only about 20 or less were still hanging around.

The champion lasted till one hour 38 minutes, I was told.

Someone said that I actually came in 10th but I’m not sure, really.

The Chicago Pipe Show, the largest pipe show on earth, is an annual event which started back in 1996, and this year’s show – the 2015 show, is the 20th annual show.

This year, there were at least 300 exhibitors and over 600 visitors from all over the world.

A 6000 square foot smoking tent was erected for smokers to fellowship and enjoy their pipes.