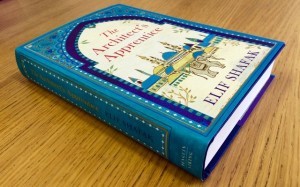 Shafak was born in Strasbourg, France, in 1971. She is an award-winning novelist and the most widely read woman writer in Turkey. Critics have named her as “one of the most distinctive voices in contemporary Turkish and world literature.” Her books have been published in more than 40 countries and she was awarded the honorary distinction of Chevalier of the Order of Arts and Letters.

Shafak has published thirteen books, nine of which are novels. She writes fiction in both Turkish and English.

Besides writing fiction, Shafak is an active political commentator – she has a PhD in Political Science – columnist and public speaker. She is a regular contributor to major newspapers in Turkey and has been featured in major newspapers and periodicals, including the Washington Times, the Wall Street Journal, the New York Times, The Economist, etc.

It is rare to find such a genius like Shafak and I hope that she continues to be prolifically productive!