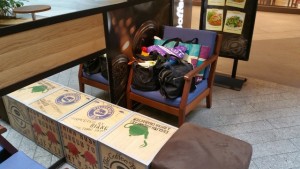 Sofa-like seats which are more comfortable are hard to come by in almost all of The Coffee Bean & Tea Leaf outlets, yet staff at their JEM Mall outlet allowed someone to place his or her belongings on a sofa seat. I observed this occurring several times and again when I was there from 10am to 11.45am on May 28th.

Several bags were placed on a sofa seat depriving customers who prefer that seat. The owner of these bags was nowhere in sight. Also because the impression given was that it was occupied, no one dared use the other accompanying sofa seat opposite it.

I was alarmed for security reasons. Who knows if those bags contain a terrorist threat? In other countries, such unaccompanied bags would have been removed by security. So I called the attention of a staff – a Malay girl wearing a tudong – who didn’t seem to care. She just mumbled something incoherent and walked away. I then asked for her supervisor and a Filipino man identified himself as the manager and he told me he allowed an “aunty” to park her bags there daily. “I know who she is,” he assured me, as if to tell me that there wasn’t bomb in one of those bags and not to worry, no one will be blown to bits.

I was blown away by the fact that he had totally missed the point.

Why do companies hire comedians to become managers?

Apparently the joker still operates a luggage depository for his favorite “aunty.”

A check on June 2nd and June 4th confirmed that.

The rest of the time I was busy giving my business to other coffee places in the mall.

Then a miracle happened. No more bags were seen when I visited again on June 11th.

I get a blast each time corporations take customers’ feedback seriously.