No Problem? Don’t Mention It 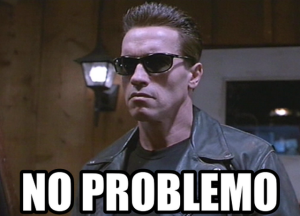 In the olden days, when my elders were thanked, they would respond by saying “Oh, don’t mention it” or “My pleasure” or “Don’t worry about it.”

Some would even say “Glad I could help” or “Happy to help.”

Later, I grew up in a world when people would say “You’re welcome” when someone say “thanks” to them. In fact, when we were in school, we were taught to respond that way.

Nowadays whenever I say “thank you” to people, the response I often get is “No problem.”

To my ear, “no problem” doesn’t sound like the right way to respond to an expression of thanks.

That’s because I think “no problem” is a more appropriate way for someone to respond to a person who has caused you a problem. Let’s say you are waiting for a friend but he shows up late and he says “I’m so sorry I kept you waiting” but the problem he has caused by being late is not really a problem, so you respond by saying “Hey, no problem at all.”

By minimizing the wrong done – by saying that it was no problem – you are acknowledging the apology and expressing forgiveness at the same time.

I am no linguistic expert but I believe “no problem” can also be used in another context. For example when someone says to you “Thanks for lending me that JP Donleavy book and so sorry it took me almost a year before returning it to you” and you respond by saying “No problem” it is your way of saying “It’s actually a problem but I forgive you.”

The use of “no problem” however is not the only change in our verbal culture – I now notice the increasingly common use of a phrase that has its origin in Australia, the phrase “No worries.”

“Thanks for helping me out with that one, sorry it took so much of your time.”

One interesting aspect of being in Singapore is that one picks up all kinds of influences.

Not all good though – just look at the superficial accents on TV. Some local talking heads try to speak like Americans, some like the British. Nothing wrong trying to imitate – that’s their problem – but often there’s no consistency in the accent adopted. Sometimes you can hear two different accents from the same mouth and that’s fucking grating for viewers like the rest of us.