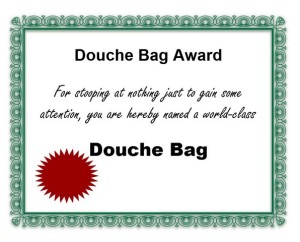 There are scammers who tell you that you are listed in some Who’s Who directories – which they will sell to you for an exorbitant fee. The vainglorious keen to see their names in print will happily fork out the money. They don’t seem to realize that they are contributing to the retirement funds of the scammers.

To cash in on people’s desire to be “recognized” there are also swindlers who create so-called “industry awards” – for a fat fee, you may be honored with some titles like “Industrialist of the Year” or “Most Innovative Asian Businessperson of the Decade” or what have you. The charlatans behind these awards are no better than those shady characters who will sell you fake degrees and diplomas. Awards are presented at black-tie events complete with VIPs as guests-of-honor and lavish dinners. (Some members of parliament, apparently, have been suckered into showing up as guests-of-honor at some similar type events.) Of course awardees will get a gigantic certificate – or two (duplicates available at extra charge of course, framing not included) – to hang on the wall as well as other trinkets for showing off. Their companies may also be honored as “Top Ten Brands in Asia Pacific” or some such nonsensical crap.

Unless you are utterly shameless, or have no qualms paying big bucks for such meaningless honors, bear in mind that the following are the ONLY awards backed by the Singapore government:

The following – among several others – are NOT backed by government bodies:

There’s nothing to stop anyone from handling out awards, nevermind the fact that those jokers issuing the awards have zero credentials whatsover to grant them. I’m not taking about their credibility here, that without question is nonexistent. I’m talking about illiterates issuing citations to PhD holders, know what I mean? Well, it’s a case of willing seller, willing buyer, right? You pay, get your “awards” and those tricksters who sell you these fake accolades get rich. That’s how it works. The wheels of capitalism continues to grind.

But to be honest, this whole business is pathetic, really. Very pathetic indeed.

Most of the awards not backed by the government are simply not worth the papers they are printed on. They are as real as Pakalu Papito.

And if you believe that Pakalu Papito is real, what can I say? I can only pity you and shake my botak head.