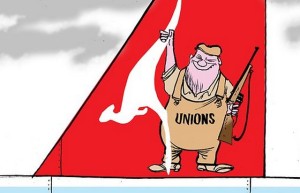 On August 9th, when Singapore was celebrating its Golden Jubilee, the airspace was closed from 6.25pm to 7.10pm.

Airlines were informed of the airspace closure as far back as January and were reminded again on July 29th and August 5th.

As if unaware of the airspace closure the Qantas inbound flight headed for Changi and had to be diverted to Batam, an Indonesian island 45 minutes away by ferry.

After refueling, it could not fly to Singapore because its crew had exceeded their maximum flying hours. Aussie unions won’t budge on that.

So they had to wait for a new crew to fly in.

Long story short, the plane could only leave for Melbourne on August 10th at 6.54pm.

It was a 23-hour delay for which Singapore was conveniently blamed.

Cathay Pacific Airways had no problems. They re-scheduled their flights months ago.

Kishore Mabubahni once wrote a book entitled Can Asians Think?

I think we now know the answer.