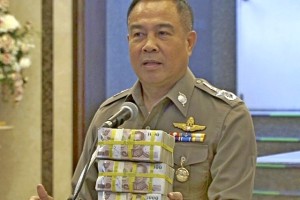 We assume that cops will do their job – well, in Thailand, the police rewarded themselves three million bahts for nabbing a bombing suspect. Since when do cops need extra incentives just to do what is their job anyway?

We assume that police chiefs aren’t paid much – well, Thai police chief General Somyot Poompanmoung said “One million baht (of the three million) comes from me.”

Before his appointment as police chief after last year’s coup Somyot declared his assets at US$11.5 million including income from advising companies as well as property holdings and investments.

We assume that police chiefs don’t and can’t freelance as private advisors or property investors but obviously our assumptions are erroneous.

Only in this failed state called Thailand, where the good guys have been overthrown and monkeys now run the country.