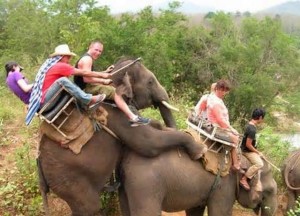 Have you had people who asked for recommendations for hotels, restaurants and places of interest before they travel to a particular country, but after receiving your advice, did completely the opposite of what you have recommended?

After more than three decades of traveling, including living in several countries for extended periods of time, many friends and acquaintances have learned to appreciate what I know and trust my recommendations – to their delight, by the way – but there is a small pocket of morons who will just ask for recommendations and then do something else completely. I refer to this behavior as “artificial intelligence” – they are basically born stupid but try to act smart by acquiring information from friends’ Facebook pages and what have you. These are the morons who will who miss out on “insider information” that only people like me know, people who have lived in certain countries for extended periods of time and intermingled with the locals  and who know the “real” places to eat, shop, and see.

And to think that I used to organize informal gourmet and sightseeing trips for friends and acquaintances to far flung countries!

No one is trying to tell you how to vacation. But truth is: Sometimes you don’t appreciate something till it’s gone.

Anyway, nowadays if someone were to ask me something like “Hey, I’ll be visiting Sydney (or Seoul or Dublin or London or New York for that matter) and since you’ve actually lived and worked there before, where do you think I should go eat, and what are the places I should see?” I’ll say “I have no fucking idea because while I was there I was in my room 24/7, when I wasn’t working my ass off, that is, and I survived only on cookies.”

Yup, let them play tourists all they want.

And if they post pictures on social media about what a great (translation: stupid) time they’ve had in whatever country they were traveling in, I’ll just have to bite my tongue.

I’m just an old has-been whose opinions don’t mean shit to anyone any more.