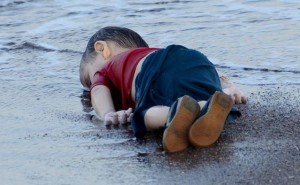 Three-year-old Aylan Kurdi, from Syria, drowned with his five-year-old brother and their mother in Turkey as they tried to flee to Europe.

On September 4th, someone placed an obituary for the little Kurdish boy Aylan Kurdi in The Sydney Morning Herald:

Rest In Peace Aylan Kurdi. May God forgive us for failing you.