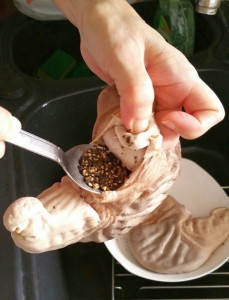 Scooping some crushed black Kampot peppercorns into a pig stomach.

Pork-tripe or pig maw cut into strips and cooked in a peppered soup is a common local dish that is often referred to as “pig stomach soup.” The Princess Terrace Café at Copthorne King’s Hotel at Havelock Road serves a very tasty version of the soup, but I suspect it is loaded with generous dollops of hair removers, er, I mean, monosodium glutamate.

But if you really want to pig out, (pardon the pun), it’s best to prepare your own at very minimal cost. We just cooked two yesterday for dinner.

The challenge is preparing the organ, which takes time and can be a rather smelly and messy affair.

First, turn the stomach inside out and scrub, scrub and scrub very hard using a combination of coarse salt, lime juice and tapioca powder – all are ingredients known for being able to combat the smell, absorb the slime and whatever gooey stuff that is attached to the stomach wall. You may even need a small knife to scrap off whatever’s stuck there. Scrub inside out (that is both sides) over and over again until there is absolutely no “pigsty” odor. Then oil it a little and sear it or quickly pan fry the organ before boiling it for five minutes.

Next crush a few tablespoons of  black Cambodian Kampot peppercorns – often rated the best pepper in the world – and insert into the stomach. If Kampot peppers are not easily available, those from Sarawak will do. (Note: If you prefer whitish, milk-like soup, then use white peppers.)

In a stock pot, combine 4 liters or 4.25 quarts of water, the pepper-stuffed pig stomach, and some crushed white peppercorns. Bring the soup to boil. Remove any “impurities” that float up.

Decrease the heat and let the soup simmer with a lid on for at least an hour and a half. To test if the pig stomach is ready, use a fork to poke it in the center; if the fork goes in easily, then it is ready to be eaten. Remember, you don’t want it too soft – a chewy texture gives a nice mouthfeel.

Remove the pig stomach and let it cool. Remove and discard the Kampot pepper corns inside and slice the stomach into half-inch wide stripes. Flavor with salt – no monosodium glutamate please – and serve hot; garnish with coriander or chopped scallions. Add some boiled ginko nuts (the canned ones will do just fine) or even button mushrooms to the soup. Dip with sliced red chilli in black soy sauce.

Cheap and good, and because it’s so satisfying – it’s a happy meal! Nothing sucks more than feeling lousy after a meal. 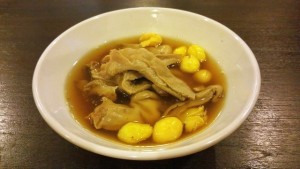 By the way, the Chinese are not the only ones who eat offals – the Scots, the French are all into offals too.